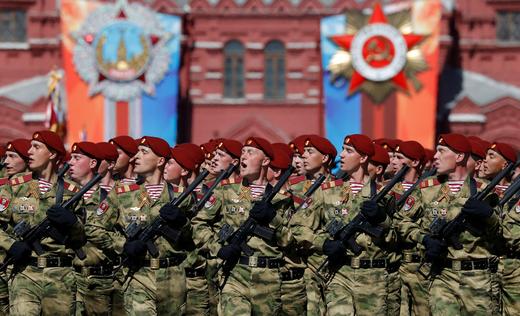 Thousands of troops marched and displayed a wide array of new military hardware and weapons yesterday as Russia held its Victory Day Parade on Red Square. President Vladimir Putin marked the occasion with a speech in which he said he does not want an arms race, and swiped subtly at (presumably the US’) “pretentions to exceptionalism”. These are currently manifesting in the form of the US announcement that it will quit the Iran nuclear agreement, which has “deeply concerned” Putin; as a result, Deputy Foreign Minister Sergei Ryabkov says a summit between Putin and his US counterpart is urgently needed. Opposition politician Vladimir Kara-Murza drew attention to the hypocrisy of Putin’s inauguration speech thanking his voters following a day on which protesters (including minors) were beaten and arrested by police, and detailed various ways in which Russia’s political landscape is like that of Belarus (“both are dictatorships”). Poland’s antitrust regulator is going after the Nord Stream 2 pipeline project, claiming that Gazprom and five other financiers haven’t yet made the project compliant with Polish law, which could potentially lead to delays. Moscow police arrested 23 left-wing activists protesting Victory Day celebrations.

Oligarch Viktor Vekselberg was questioned by the FBI recently about half a million dollars allegedly paid by his company’s US affiliate to US President Donald Trump’s personal attorney. The Washington Post has some professional background on Vekselberg, including rumoured Putin ties and some of the recent allegations against him, but for a more detailed analysis of Vekselberg, read Leonid Bershidsky: “Russian hierarchies aren’t straightforward,” he writes, explaining that Vekselberg’s ties to Putin are real but complex. The US Senate Intelligence Committee has concluded that hackers affiliated with the Kremlin penetrated voter-registration databases in 2016. This piece explores Russia’s current relationship with Guatemala, including accusations of Kremlin election meddling and a rumoured tie with CICIG. Condoleezza Rice has a telling Putin anecdote.

Putin has been making the promise to put Russia’s economy into the global top five for over a decade. The NY Times reviews Timothy Snyder’s book on Russia’s ties to Europe and Putin’s ideas: “a strange and toxic mixture of fascism, religion and 19th-century notions about race and the struggle for survival”. The Guardian reviews former US ambassador Michael McFaul’s book on US-Russian relations over the past four decades.

PHOTO: Russian servicemen march during the Victory Day parade, marking the 73rd anniversary of the victory over Nazi Germany in World War Two, at Red Square in Moscow, Russia May 9, 2018. (Reuters/Sergei Karpukhin)