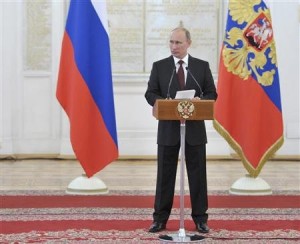 Vladimir Putin’s move to call snap elections in Moscow for the mayoral post is ‘a lesson in how he sustains an authoritarian system with the veneer of democracy’, says the WSJ, but acting Moscow Mayor Sergei Sobyanin says he tendered an early resignation from the position not to gain an advantage over his opponents, but to get political support for his programmes, and said it was important that the early elections would mean that Muscovites could elect their own mayor.  Opposition figure and anti-corruption blogger Alexei Navalny is to be nominated by the RPR-PARNAS party to run in the elections, which will be held in September.  Public broadcaster OTR has pulled its show The Social Network, and its presenter, Vladislav Sorokin, alleged on Facebook that it was taken off the air because of a joke about Putin’s divorce.  OTR denies the claim.  Most Russians were not surprised by the news, says this report.  The divorce makes his personal life ‘a legitimate matter in the country’s political discourse’ and could dictate his future politics, says this piece.  A Levada Center poll indicates that 41% of Russians consider Putin an ideal or ‘close to ideal’ leader.  Vladimir Frolov says Putin should disband his political project, the Popular Front: ‘The president should communicate with all voters, not just those who profess blind loyalty to him.’

A dispute between Gazprom and RWE over gas price contracts will be solved by an arbitration court after direct talks failed.  Bloomberg discusses the intertwining of Gazprom and Putin, discussing the company’s recent loss of value, ‘inertia’, and mismanagement: ‘Its managers are used to exercising Soviet-style monopoly over consumers, not having realized that the market has taken over.’  A wave of dirty fuel leaving Russian refineries is proof that it’s cheaper to export cheap fuel oil than the crude from which it is made, says Reuters.  Deputy Prime Minister Dmitry Rogozin has been bragging about the power of Russia’s ‘missile defense killer’, and says his country is situated ‘in a forest full of predators’.

This piece looks at the Bolotnaya Square case against twelve protesters, presenting it as a means of intimidating others from protesting.  The New York Times has compiled videos of the actions of five protesters that led to their arrests.  A documentary about Pussy Riot will air in the U.S. tonight.  Orthodox Church head Patriarch Kirill wants monks to refrain from using cellphones to access the ‘great temptation’ that is the Internet.  Police in the U.K. say that the death of Russian whistleblower Alexander Perepilichny showed no suspicious circumstances.