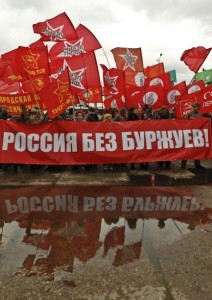 President Vladimir Putin has warned the European Union that it must resolve its ‘regrettable‘ antitrust probe into Gazprom if it wants to avoid ‘losses on both sides’, saying that the investigation was ‘not a constructive approach’, and accusing ‘United Europe’ of trying to keep its political influence.  At the same time, he insisted that Russia has ‘warm relations’ with Europe, and insisted that there was no risk of a trade war.  Gazprom is suspending purchases of gas from independent, non-Gazprom producers in Russia, blaming ‘unstable demand’.  The APEC summit has come to an end.  Highlights included a deal between Gazprom and Japan’s Natural Resources Agency to build an LNG plant in Vladivostok.  Many at the summit noted strong growth in the Asia-Pacific region, contrasting it with the decline of Western economies.  Putin called for trade barriers to be smashed, and both he and Chinese President Hu Jintao expressing concern over the faltering global economy.  ‘Russian officials admit that their current share of Asia-Pacific trade stands at a humbling one percent.’  President Vladimir Putin expressed an aim to actively promote consolidation in the Russian banking sector, as Sberbank posted an eight-month net profit of $7.41 billion, a 6% increase on the same period last year.

U.S. Secretary of State Hillary Clinton has dismissed Russia’s latest proposal for a UN Security Council resolution on Syria: ‘There’s no point passing a resolution with no teeth’.  Clinton was reportedly one of those onlookers who was startled by Putin’s donning a bird costume for his endangered crane flight last week.  Putin’s spokesman, Dmitry Peskov, said that some of the reactions to the widely-ridiculed flight ‘bordered on insanity’.  Putin’s comments on the cranes that did not make the flight – that ‘there are little birds who never want to fly with the flock’ – are being seen as a jibe against his opposition.  An attempt by RPR-PARNAS to unite opposition figures from various groups failed last week after many of those invited snubbed the meeting for ‘ideological reasons’.

Environmental activist Yevgenia Chirikova has been approved to run for mayor of Khimki.  Patriarch Kirill has announced that he believes the Orthodox Church is under attack by those who fear its ongoing revival, and promised ‘We will not stop’.  Artist collective Pussy Riot have released a video for the MTV music awards in which they burn a picture of Putin.