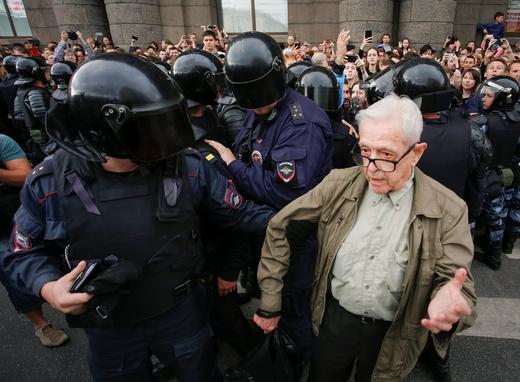 Protesters gathered across the country on election day yesterday against planned increases to the pension age; the protests were called for by opposition leader Alexei Navalny, who is currently in jail. (Ahead of the vote, Google responded to Russian authorities’ pressure and removed a YouTube video of Navalny calling for Russians to join the demonstrations.) The number of reported arrests differs widely, despite all reports quoting the same source, OVD-Info: the Moscow Times estimates that 153 protesters were detained during the marches across 19 towns and cities; the Independent put the number at 300; other sources cited as many as 800 detentions, and claimed that protesters were beaten with batons. RFE/RL puts the number at more than 1,000, with the largest number of detentions happening in St. Petersburg. The protests in Moscow alone gathered over 2,000 people who chanted “Putin is a thief!” Sergei Sobyanin won his Mayoral post back with 70% of the votes, with a turnout of just 30%. Navalny accused Sobyanin of financing a “troll factory”, via IMA Group, the agency running his campaign, to sway public opinion in advance of the vote. (IMA was the agency that promoted Putin’s presidential vote with a selfie challenge.) This piece explains that Sobyanin had “no real rivals” because, due to the number of municipal deputy endorsements required, opposition candidates need support from the ruling United Russia party. According to the Central Election Commission, more than 120,000 observers were sent to polling stations across Russia over the weekend. The Interior Ministry opened 17 criminal cases relating to the elections ahead of voting day.

A group of pro-Kremlin nationalists attacked the volunteers guarding the makeshift memorial to Boris Nemtsov; police allegedly did not respond to the volunteers’ call for help. Federal prosecutors in the US admitted that they mistakenly accused suspected Russian spy Maria Butina of offering to trade sex for a job at a US lobbying group.  Two members of Pussy Riot were detained on election day on the same charges they were jailed for following their World Cup protest in police uniforms, this time for driving in their own car. Two Russian women have been acquitted of murdering their husbands in self-defence domestic abuses cases.

Vietnam has placed more than $1 billion worth of orders for Russian weapons and military services. Moscow will continue to supply weapons to Armenia. Despite six months of talks, no progress has been made on plans for Russia and Kazakhstan to supply wheat to Iran.