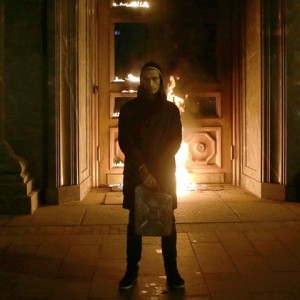 Although Kremlin news agency Sputnik apparently tried to point the finger at Britain’s MI6, and Dmitry Kiselyov hinted that the US was responsible, Russian officials, for the first time, are on the verge of admitting they believe that the plane crash in Egypt was caused by a bomb; Prime Minister Dmitry Medvedev said the possibility of a terror attack ‘is of course there as the reason’. US intelligence says Russia has harboured this suspicion from the start.  Medvedev also discussed the ongoing airline crisis in the wake of the plane crash over Sinai last month, saying that flights to Egypt are unlikely to be resumed any time soon; a decision that will further harm Russia’s struggling tourist industry, says Bloomberg.  Russia and Iran are moving closer towards implementing their missile supply deal.  Radical performance artist Pyotr Pavlensky was arrested and charged with hooliganism following a performance which involved him setting fire to the doorway of the Federal Security Service office building.  ‘In assaulting the FSB headquarters, Pavlensky has drawn attention to an architecture of terror,’ says the Guardian.

The World Anti-Doping Agency (WADA) is recommending that Russia be banned from athletics competition entirely over doping allegations; Australia has backed it.  Russia’s sports minister Vitaly Mutko says there is ‘no objective evidence’ for WADA’s recommendation, and called the report a ‘political hit job’; but the sports ministry itself says it is ‘fully aware of the problems in the All-Russia Athletic Federation’ and that it is taking measures to rectify the situation.  The New York times lists the key figures implicated in the WADA report.  Human rights group Memorial is the latest organisation to be added to the Kremlin’s list of ‘foreign agents’.  The Boris Nemtsov Foundation for Freedom has been established in Germany, and will continue the murdered politician’s mission, says his daughter Zanna.

Russia loses 468 square kilometers to erosion and melting permafrost every year.  Details of property owned overseas by the Kremlin has been made secret, it says, to protect national security.  The Russian-language torrents website Rutracker.org has been shut down for good under a Moscow City Court decision.

PHOTO: Pyotr Pavlensky poses after setting fire to the doors of the headquarters of the FSB security service, the successor to the KGB, in central Moscow early on November 9, 2015 Photograph: Nigina Beroeva/AFP/Getty Images