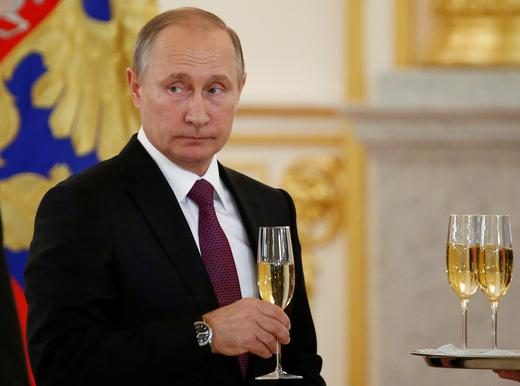 President Vladimir Putin congratulated Donald Trump on his US presidential win with a telegram, expressing hope for the resumption of Russia-US relations and joint work on ‘pressing international issues’.  Speaking in the Kremlin, Putin said, ‘as I have repeatedly said, it’s not our fault that Russian-American relations are in such a poor state. But Russia wants and is ready to restore fully fledged relations with the United States.’  The news was greeted with applause in the State Duma, as many are hopeful that the win will lead to the lifting of the West’s anti-Russia sanctions, and a subsequent revival of investment.  Neither the Central Bank nor Finance Minister Anton Siluanov anticipated that there would be any significant negative impact on the economy or the ruble. Russia was indeed one of the survivors of global market turmoil that followed the news, showing a 2.2% gain on the MICEX – the largest rally in emerging markets.  Mary Dejevsky says a Trump presidency is likely to be very promising for US-Western relations, and that he has the ability the establish a better relationship with Putin than Obama and European leaders.

The Defence Ministry says Russian warships in the Mediterranean Sea drove away a Dutch submarine that was apparently shadowing it.  Police detained three supporters of jailed activist Ildar Dadin as they protested outside the Prosecutor General’s office in Moscow.  The Finance Ministry says no exemptions will be granted from the new policy that calls for state companies to pay 50% of their profits in dividends.  Tatiana Moskalkova, the Ombudsman for Human Rights, is proposing that Russia hold a referendum to decide whether the government should adopt a proposed ‘law on the Russian nation’.

Russia ‘was one of the few countries on the planet that generally preferred Trump over Clinton,’ notes the Moscow Times.  Ukraine responded to the news of Trump’s win with worry, having previously considered Washington to be its strongest ally against Russia.  Putin says that Russia is ready to restore a dialogue with Poland.