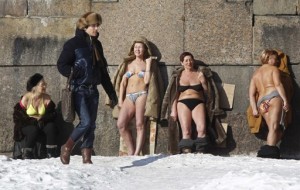 A sanctioned rally to mark International Women’s Day last Friday ended in the arrest of 16 ‘feminist protesters’ for violating public order and, according to the Interior Ministry, ‘shout[ing] slogans that had not been agreed on’; the protest was organised by Yabloko to support women’s social and economic equality.  In a separate protest outside the Federal Penitentiary Service, six pro-Pussy Riot activists were temporarily detained.  A leader of the Voina art group said that the event was intended to be a series of single-person pickets.  Over 1,000 people gathered in the village of Novokhopersk in the Voronezh region yesterday to protest against the projected launch of nickel and copper mining ventures, fearing that they will threaten the region’s environment.  The trial against dead lawyer Sergei Magnitsky is due to open today.  The European Parliament calls it ‘a violation of international and national laws and clearly shows the malfunctioning of the Russian criminal justice system’.  Magnitsky’s mother says she will refuse to take part in the ‘circus’ of his trial.  Newly-crowned Miss Russia Elmira Abdrazakova says that the two-year sentencing of Pussy Riot members Maria Alyokhina and Nadezhda Tolokonnikova was too harsh, suggesting that it might have been better to work with the girls to change their view of the world.

The Kremlin says that Russia’s ties with Venezuela will remain close enough for them to protect their interests, even if the opposition party succeeds Hugo Chavez.  Orthodox priests are to join the team of psychologists that the Emergency Ministry sends to disaster and accident sites.  Municipal deputies, the lowest level of elected official, are enjoying ‘a resurgence’ in Russia thanks to the energy and political enthusiasm of young voters.  Police have opened a criminal investigation into fraud allegations against RusHydro employees.

The New York Times has a profile piece on ‘London Russian’ Evgeny Lebedev.

PHOTO: People sunbathe by the wall of the Peter and Paul Fortress in St. Petersburg March 10, 2013. REUTERS/Alexander Demianchuk