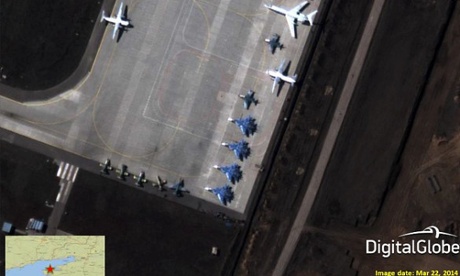 Satellite images newly released by Nato show a strong Russian military buildup along Ukraine’s eastern border, giving grounds to Western fears of an invasion, and challenging Russia’s prior assertion that it has no plans to use force.  In a letter to the leaders of 18 EU states, President Vladimir Putin warned that Russia will cut natural gas deliveries or switch to an advance payment system for Ukraine if Kiev fails to pay its debt, and that such a move would inevitably reduce the gas available to Europe; approaching the matter from another angle, Deputy Prime Minister Igor Shuvalov says that, in any case, Russia doesn’t need the West’s energy custom.  Furthermore, Shuvalov said, the threat of further sanctions will not change Moscow’s policies; he insisted that current capital outflows are due to fluctuations in the ruble exchange rate, not the Ukraine crisis.  Putin says that the annexation of Crimea was not planned in advance, and that he only made the final decision ‘after the mood of the people became clear’.  Russia is considering pulling out of the Council of Europe after the human rights body voted to withdraw Russia’s voting rights in the wake of a three-hour debate condemning Russia’s actions in Ukraine.

Dmitry Kiselev has written a column in the Guardian boasting of Russia’s freedom of speech and criticising what he calls the West’s problem of ‘political correctness’.  A deputy editor at Dozhd, Russia’s last remaining independent television, writes in the same publication about the broadcast that led to the channel’s exclusion from most cable and satellite services.  Ukrainian activist Andrei Shchekun alleges he was abducted and tortured by a group from Crimea’s pro-Russian ‘self-defense’ force last month.  State Duma lawmakers want an investigation opened into former Soviet President Mikhail Gorbachev for his role in the 1991 collapse of the USSR.

Gazprom has taken over Kyrgyzstan’s KyrgyzGaz natural-gas corporation, and will change its name to Gazprom-Kyrgyzstan. BP is reassuring shareholders that it will not be forced out of Russia, that it will keep its 20% stake in Rosneft, and that it may be able to use its presence in the country to stabilise relations with the West.  VTB bank says it has received unprofessional demands and ‘very strong pressure’ from the Bank of England this week, alleging political motives.