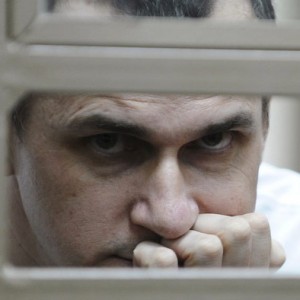 Russia’s Justice Ministry is apparently mulling the handover of four Ukrainian prisoners (among them film director Oleg Sentsov) to Kiev in a possible prisoner swap.  The ministry asserted however that any final decision would be made by the courts.  Federation Council lawmaker Frants Klintsevich of the defense and security committee sees no hope for an improvement in Ukraine-Russia relations as a result of Ukrainian Prime Minister Arseniy Yatsenyuk’s resignation.  Bloomberg’s Leonid Bershidsky notes that President Putin’s plans to create a National Guard, a domestic army responsible to him personally, may be motivated by the hope its loyalty would be more certain ‘than that of the Defense Ministry, run by the popular — and, reportedly, increasingly independent — Sergei Shoigu‘.  ‘Anti-rudeness’ activist group Stopkham, an offshoot of Nashi, was once a Kremlin favorite: the Moscow Times considers how and why the authorities have turned against them.  Could it be ‘because the most insolent people in Russia are officials themselves‘?

Moscow has confirmed it has no plans to cease selling arms to either Azerbaijan or Armenia, who are locked in a recently renewed conflict over the Nagorno-Karabakh region.  After a lengthy hiatus, the NATO-Russia Council will hold a meeting in Brussels in the next two weeks to discuss military activities, transparency and risk reduction.  Russia’s Ambassador to NATO Alexander Grushko said he does not expect a ‘breakthrough’ but hopes for ‘focused discussion’.  Energy Minister Alexandr Novak says Russia is ready to freeze oil production at January’s level of 10.9 million barrels a day.

Trouble ahead noted for lender VEB, having backed costly prestige project the Sochi Olympics, the bank has ended up holding the equivalent of at least $2.9 billion in overdue loans.  Bank of Russia Governor Elvira Nabiullina has suggested that the reasons for rising inflation are largely linked to the ‘lack of balance in the budget’ and Finance Minister Anton Siluanov agrees; the two are seeking greater coordination ahead of the parliamentary election this year.  Some hedge fund managers are confident that the central bank will manage to bring inflation down – according to this article, they are hoovering up ruble assets.  Sport Minister Vitaly Mutko says no one will face criminal charges over the worst doping scandal in Russia’s history, because ‘the General Prosecutor’s Office carefully examined the report in question and did not find a single legally supported fact to open any kind of case’.