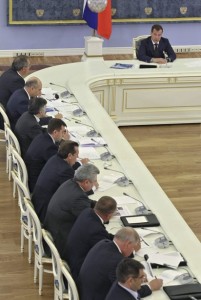 The State Duma will vote this Friday on whether or not to oust Kremlin critic Gennady Gudkov for his conflicts of business and political interests, instead of expelling him outright, a measure that many had called for.  Opposition figures say Gudkov’s case is one of political persecution, and are expecting his removal to pave the way for further expulsions of dissenters.  ‘United Russia holds the majority needed to pass the measure.’  A Moscow court has ruled legal investigators’ refusal to return the $1.7 million in cash seized from socialite and opposition figure Ksenia Sobchak’s apartment during a raid, as her lawyer pointed out that there is ‘no basis for […] withholding the money’, and promised to go to a higher court.  The head of Russia’s Consumer Rights Protection Society has launched a bid to have Patriarch Kirill excommunicated, on grounds that he violated the same church laws used to prosecute Pussy Riot.  A reported 1,000 people attended a music festival held in support of the group over the weekend, in St Petersburg, despite official attempts to prevent it from going ahead.

A new report published by Alexei Navalny’s Foundation for Fighting Corruption accuses state-controlled VTB of ‘a pattern of mismanagement and questionable practices’.  The controversial Khimki toll road, which was built through the Khimki forest and, as a result, has been the focus of much environmental activism, is to open to traffic in 2014.  The Energy Ministry says it will slow the rate of tax increases on natural gas extraction for independent gas producers.  Newly released documents suggest that the U.S. helped Russia to cover up Josef Stalin’s Katyn massacre.  The U.S. has begun issuing 3-year visas to Russian citizens.

Russia’s Paralympic team came second overall at the London games with 36 gold medals.  RFE/RL has some visual highlights.  VOA looks at Vladimir Putin’s plans to modernise and develop the city of Vladivostok.