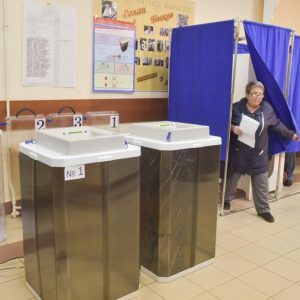 Yesterday elections took place in 82 regions for different levels of government; they were marked by low turnout, (despite the attempts by authorities to entice voters with events and giveaways) and accusations of fraud (election monitor Golos had received 1304 complaints by the afternoon). Acknowledging the level of interference from the Kremlin, the Moscow Times’ Maxim Trudolyubov has described these elections as ‘essentially non-competitive’. Two senior officials in Moscow’s Novo-Peredelkino district have been fired after being caught on camera bribing election monitors to rig the vote. Opposition politician Ilya Yashin, running for a seat in a Moscow district council, has spoken of pressure on the elderly to vote for United Russia from social workers. Fellow opposition leader Dmitry Gudkov has made similar accusations, on the basis that home voting figures in Moscow were four times higher than previous years. Gudkov’s campaign manager Maksim Katz has provided video evidence of opposition candidates’ campaign leaflets being removed from apartment buildings. The Gudkov headquarters is the subject of considerable interest in these elections, as the politician’s ‘United Democrats’ have created what the Moscow Times calls a ‘political uber’, designed to facilitate the process of registering candidates and involving young activists in the political process itself. Seems to have worked: the number of young people nominated to become candidates in municipal elections in Moscow has reached a record high. Although United Russia has performed powerfully as anticipated, according to preliminary counts, in the capital there is evidence that opposition candidates have made some gains in district councils.

Following an arson attack on her car which was concluded to be an assassination attempt, Kremlin-critical journalist Yulia Latynina has decided to leave Russia.  Opposition activist Sergei Udaltsov, who was released from prison in August, has reportedly been called for questioning by federal investigators over his participation in the 2012 Bolotnaya protests, for which he ended up in custody in the first place. Vladimir Zhirinovsky, the leader of the Liberal Democratic Party in Russia, has asked the Investigative Committee to release acclaimed director Kirill Serebrennikov from house arrest; likewise in France dozens of cultural figures have rallied in support of the artist, who is facing ten years in jail over embezzlement charges. Russia’s Zapad war games may be causing controversy, but they do offer a window in to the way its army operates. Nato has asserted that Moscow must allow its monitors to observe the exercises.

President Putin has awarded the Alexander Nevsky medal, one of the country’s highest civilian honors, to former Ambassador to the US Sergey Kislyak, who has been a key name in the Trump-Russia ties investigation. A Chinese conglomerate will purchase a 14% stake in state oil giant Rosneft for $9.1 billion, solidifying the China-Russia ties that have deepened in the wake of Western sanctions. Unlike China, since Putin has approved the use of digital currencies, Russia is looking into how to conduct initial coin offerings.