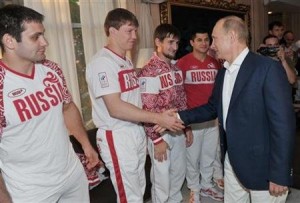 One of the three Pussy Riot activists has been released following yesterday’s appeal.  Yekaterina Samutsevich has walked free; Nadezhda Tolokonnikova and Maria Alyokhina have had their prison terms upheld. ‘No one should be fooled,’ said Amnesty International, ‘justice has not been done today.’  All three of the girls apologised for offending religious believers, saying that the motive of their original protest was political, not religious.  Samutsevich’s release has split the group’s supporters, with many accusing her of betrayal.  One of the five criteria for applicants to a new business program at the Academy for Entrepreneurship includes heterosexuality.  ‘Gays in Russia and especially Ukraine are used to the general public’s ignorance and homophobic attitudes,’ says Bloomberg in an opinion piece responding to new anti-homosexual ‘propaganda’ laws in both countries.  Russia has demanded an explanation as to why Turkish authorities grounded and searched a Syria-bound passenger plane.  In the latest indication of an ‘isolationist streak’ in Kremlin policy, Russia says it will not automatically extend a 20-year-old deal with the U.S. to deal with Soviet nuclear legacy.

Canadian Jeffrey Delisle, a former navy intelligence officer, has pleaded guilty to espionage and selling secrets to Russia for $3,000 a month.  U.S. authorities are accusing Kazakh-born Alexander Fishenko of running a Houston-based company that obtained highly regulated technology and clandestinely exported it to Russia.  Goldman Sachs has pulled out as global coordinator of MegaFon’s IPO due to corporate governance concerns.  President Vladimir Putin lobbied Iraq’s prime minister to support energy investment as Russian companies boost their activities in Iraq.  He claimed that new arms contracts, which make Russia the second-biggest weapons supplier to Iraq, show a restored confidence in Russian arms.

The five Siberian cranes that flew with Vladimir Putin in a hang glider did not manage to migrate south; the one that made the flight was attacked by wild dogs.