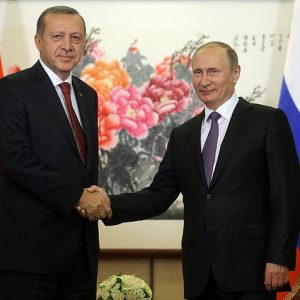 Oil prices have jumped after Vladimir Putin announced that Russia is willing to support OPEC’s attempts to increase oil prices by suspending production, as it is, in his words, ‘the only way to preserve the stability of the energy sector and accelerate a rebalancing of the market’.  Igor Sechin, the CEO of Rosneft, which accounts for 40% of Russia’s crude output, says however, that his company will not participate.  The energy chief has won a libel case against Novaya Gazeta over claims that his wife frequently travelled on one of the world’s most expensive yachts.  The Moscow Times examines Rosneft’s legal assault on the RBC media holding company, including three of its journalists, for allegedly causing damage to its share prices as a result of an article on its capitalisation.  Rosneft’s hopes to recover $49 million in damages are apparently unlikely to come to fruition.

According to Deputy Defense Minister Nikolai Pankov, plans are afoot to turn Russia’s naval facility in the Syrian port of Tartus into a permanent military base.  Cooperation in Syria was apparently discussed at yesterday’s meeting between Turkish President Tayyip Erdogan and Vladimir Putin, which concluded with the former expressing confidence that ‘the normalization of Turkish-Russian ties will continue at a fast pace’.  The two parties signed an agreement on the Turkstream pipeline which would allow Russian gas to enter Europe via the Black Sea, bypassing Ukraine.  After months of negotiations, Belarus and Russia have reportedly reached a deal on natural gas and oil imports – though Russia has been keen to deny reports from Minsk that in doing so it offered a reduction on the price of gas.

Journalists examining surveillance culture have found that more than one million Russians are expected to be under wiretap surveillance by the end of 2016, after a radical increase in court approved usage of such devices.  Take a look at the phenomenon of ‘market feudalism’ in Russia via the case of Dmitry Zakharchenko, the acting head of one of Russia’s anti-corruption agencies who was found with a stash of $120 million in cash, courtesy of the Moscow Times.  RFE/RL also delves into corruption in the country’s railways.