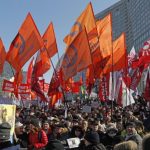 Saturday saw thousands of protesters gathering in Moscow for an anti-Putin demonstration, although numbers range between 10,000, 20,000, and 25,000 – in all cases, much lower than the 50,000 that organisers had initially hoped for, and at best, a quarter of the numbers drawn by earlier protests.  The BBC has video footage.  Opposition figures are saying now that the movement needs to develop a long-term view, and needs to pause before organising another mass action ‘so as not to tire people out with frequent demonstrations’.  The Washington Post welcomes the appearance at the rally of many ‘younger faces’.  Police detained ‘about a dozen’ protesters taking part in an unauthorised march on the same day, including Sergei Udaltsov, spurring Vladimir Ryzhkov to speak out against breakaway demonstrations.  Recent demonstrations are estimated to have cost the Moscow budget $102,000.  A Moscow court yesterday filed formal charges against Alexei Kozlov, the husband of political activist Olga Romanova, sparking concerns that the Kremlin are going to begin cracking down on its opposition.  Russian Justice Initiative, the foreign NGO which provided legal assistance to Russians in the European Court of Human Rights, has been excluded from a list of authorised NGO.

The Guardian counts journalist deaths in the years since Vladimir Putin came to power.  A group of Orthodox Christians have become the surprise supporters of the imprisoned members of Pussy Riot, petitioning the head of the Church to release them.  A prayer session planned in support of the group was denied entry into a church in Moscow, says The Other Russia.  The governor of St Petersburg has signed into law new measures against ‘homosexual propaganda’.  Gay rights activist Nikolai Alexeyev has filed a $34,000 defamation suit against a St Petersburg lawmaker for calling him a ‘girl’.  Russia is aiming to try both Sergei Magnitsky and William Browder for tax evasion, according to a senior official at the Interior Ministry, as Swedish lawmakers press their government to impose asset freezes and travel bans on officials linked to the former’s death.  Magnitsky ‘never found any evidence of corruption against senior Moscow officials’, says the Interior Ministry.

Barack Obama apparently telephoned Vladimir Putin on Friday to congratulate him on winning the election.  Putin is planning to expend his third-term presidential efforts on ‘the physical and spiritual development of the country’.  Former Finance Minister Alexei Kudrin will not be joining his team.  Vladimir Frolov considers the significance of Mikhail Prokhorov’s presence on the political scene.

‘[T]he Jewish community is thriving in the mainstream of Russian society and that it will endure, regardless of what anti-Semites have to say about it.’  The 2014 Winter Olympics in Sochi will see female ski jumpers making their debut.  The Moscow Times profiles the city of Veliky Novgorod.  The Telegraph documents some alleged evidence of St. Petersburg voting fraud.

PHOTO: Opposition protesters with their flags gathered in center of Moscow during a rally, Russia, Saturday, March 10, 2012. (AP Photo/Ivan Sekretarev)