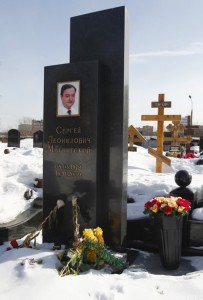 The trial of dead lawyer Sergei Magnitsky was postponed on its first scheduled day yesterday, partly because the defense attorneys had petitioned for the trial to be delayed until May, and partly because they then reportedly failed to show up at the trial.  RFE/RL meanwhile puts Magnitsky’s large-scale fraud investigation, ongoing at the time of his death, into context: ‘What if $230 million went missing and no one wanted to get it back?’  The bid to introduce a European Magnitsky List is gaining momentum.  Gazprom is state-run, but the Deputy Economy Minister admits that ‘even we, to put it mildly, can’t always see where, how much, and why so much money is being spent’.  President Vladimir Putin meanwhile wants state companies to provide authorities with informal information about their monthly deals.  Senior lawmaker Irina Yarovaya has denied media reports that she failed to declare ownership of the $2.9 million Moscow apartment that she reportedly lives in, saying that the apartment is owned by her daughter and that its value had been overstated.  Yarovaya, who is, ironically, the head of the Kremlin’s anti-corruption committee, commented that the allegations were ‘nothing more than dirty innuendo’.

The Kremlin says that the upcoming Sochi Olympics will be a celebration of disabled athletes’ dedication, but this report suggests that the Games in fact will draw attention to Russia’s poor treatment of its disabled population.  Texas authorities are sticking to their ruling that Max Shatto’s death was accidental, and continuing to block ongoing attempts by Moscow officials to access investigative materials: ‘We’ve given them the same thing that we’ve given to everybody else.’  Former Economic Minister Elvira Nabiullina may take charge as head of the central bank.  According to Oleg Gordievsky, Moscow has as many spies in the U.K. today as it did during the Cold War.  ‘Now that Chavez is gone, the one factor that has always worked against Russia — its lack of technological innovation — will play an even larger role in Venezuela turning to China instead of Russia for military and technical cooperation.’

The general director of the Bolshoi Theater says he believes that Pavel Dmitrichenko, who confessed to an acid attack on Sergei Filin, was ‘a pawn in someone else’s hands’.  The existing shareholders of Yandex, including its co-founder and CEO, will sell $600 million worth of the company’s shares (roughly 7.4%).

PHOTO: Flowers lie near the grave of lawyer Sergei Magnitsky in the Preobrazhensky cemetery in Moscow March 11, 2013. REUTERS/Mikhail Voskresensky