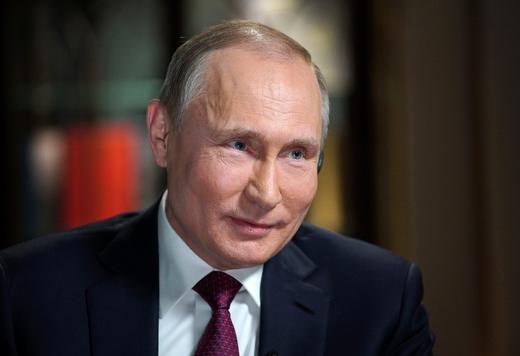 In an intense interview with Megyn Kelly on NBC news yesterday, President Vladimir Putin said he “couldn’t care less” about alleged Russian interference in the US election because it has nothing to do with the Kremlin, and, under pressure from Kelly, blamed it on “Ukrainians, Tatars or Jews, but with Russian citizenship”, drawing condemnation and outrage. “It is deeply disturbing to see the Russian president giving new life to classic anti-Semitic stereotypes that have plagued his country for hundreds of years.” He also said he found stories of chemical weapons attacks in Syria “boring”, and denied having a friendship with Yevgeny Prigozhin. Separately, in a two-hour, newly-released documentary, Putin revealed that his grandfather was a member of both Lenin and Stalin’s staff, working as a cook, and said that circumstances under which Crimea would be returned to Ukraine “do not exist and never will”. He also spoke about the Arctic, saying that the region is extremely important for Russia’s security. Russia continues to trade war rhetoric with the US; a Duma deputy said that Russia would be capable of repelling any US attack. A successful launch of a new hypersonic missile was completed yesterday in Kinzhal.

This piece reports on the measures the Kremlin has gone to in order to entice voters to the polling stations this weekend (with selfie competitions and free cars), despite the absolute certainty that Vladimir Putin will be re-elected. “The 2018 election may already go down as one of Russia’s most bizarre and inert.” Nonetheless, Federation Council head Valentina Matviyenko is anticipating a higher turnout than in previous elections and dismissed the idea that the result is a foregone conclusion. “Citizens have several candidates to choose from.” The real question, says one analyst, is: what will happen when Putin is no longer able to rule. The Washington Post interviews a former neighbour of ex-spy Sergei Skripal, who was poisoned in Salisbury, UK with nerve gas last week, who says there is no proof of Russian involvement. “If they wanted him dead, they would have killed him in Russia a long time ago.” The FT also notes that as yet, there is no solid proof of Russian involvement, but that the UK must be poised to act “robustly” if there is. Oliver Bullough in the Guardian calls on the UK government to cancel the visas of Putin’s inner circle who, he says, use South-east England as their “playground”.

Foreign Ministry spokeswoman Maria Zakharova is the latest to accuse State Duma lawmaker Leonid Slutsky of sexual harassment in relation to comments he made over a dinner, and made a subtle dig against Tamara Pletneva, the head of the Duma’s Women’s Committee, who had said that those accusing Slutsky were not dressed appropriately. Pletneva says that any legislation against sexual harassment in the Duma would be “absolutely excessive”. Bloomberg View tackles the op-ed penned by Oleg Deripaska in the Daily Caller last week, putting into the context of Deripaska’s trouble getting a US visa and his problematic association with Paul Manafort.