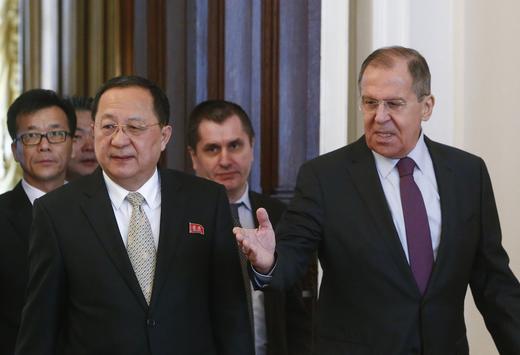 Following US President Donald Trump’s Twitter threat that US missiles would soon be on their way to Syria, oil prices reached their highest levels since December 2014. Kremlin spokesman Dmitry Peskov dismissed Trump’s “Twitter diplomacy”, saying that Russia expects a serious approach, and urged the US not to attack, arguing that it could destabilise the Middle East. Responding sardonically to Trump’s appeal to “stop the arms race?”, Foreign Ministry spokeswoman Maria Zakharova Tweeted back that the destruction of chemical weapons could begin in the US. The White House says that no actual timetable for action has been laid out. Earlier this week the Deputy Foreign Minister said there was no threat of a military clash between Russia and the US in Syria and that common sense would prevail; President Vladimir Putin echoed his sentiments the following day and promised that Russia would promote “a positive, forward-looking agenda”. CIA director Mike Pompeo will tell the Senate today that years of soft US policy towards Russia are “now over”. Russia’s Navy is reported to have been firing drills off the coast of Syria yesterday in preparation for a US airstrike. It was revealed that the National Rifle Association has received donations from dozens of Russian nationals in the past 3 years.

Despite not even being included in the US’ latest round of tough sanctions against Russia, Sberbank is one of the worst-hit stocks since the announcement, with share prices falling more than 20% this week; aluminium giant Rusal has been effectively “removed from the market” and is receiving government support. Prime Minister Dmitry Medvedev is considering targeting US imports and products in retaliation, and said that Russia would cope with the new pressure. “We’ve learned how to do it,” he said. Three activists were arrested after protesting outside the State Duma against what they are calling an official backlash from the Kremlin in response to sexual harassment allegations against Duma speaker Leonid Slutsky; they had been picketing individually, after their 4 requests to hold larger protests were denied. Former journalist and Duma deputy Okana Pushkina writes in the Moscow Times about the allegations, and her work to introduce legislation that will secure women’s rights in Russia. Opposition politician Ilya Yashin has announced his plan to run for Moscow Mayor later this year.

Yulia Skripal, who was attacked in Salisbury, UK last week with her father, the former Russian spy, issued a statement through Scotland Yard refusing the Russian embassy in London’s offer of its services. The Embassy responded that it did not trust the authenticity of the statement.