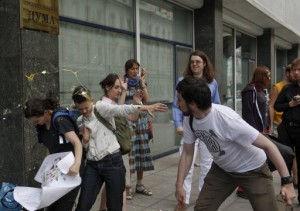 The State Duma yesterday unanimously (436-0) passed a law that bans ‘gay propaganda’ on a nationwide scale.  More than 20 gay rights activists were detained outside of the parliament during the vote for enacting a ‘kissing protest’, after being spat on and pelted with eggs by Orthodox and anti-gay protesters.  RFE/RL has photos of the clashes, and the BBC has some upsetting video of protesters left by police to fend for themselves against attacks after the demonstration.  The same afternoon, the Duma also passed a law that criminalises blasphemy, allowing jail sentences of up to twelve months for ‘offending religious feelings’, prompting Amnesty International to mark yesterday as a ‘dark day’ for Russia’s freedom of expression, and slam the government for ‘pandering to the most reactionary elements of society’.  During an interview with Russia Today, President Vladimir Putin accused U.S. diplomats of interfering in Russian politics by ‘actively cooperating [with Russia’s opposition] and support[ing] them’.  The Independent criticises the platform from which Putin made these statements, noting that ‘foreign journalists were invited to observe the interview with Mr Putin, but were not allowed to ask their own questions’.  Putin also defended the right of the special services to wiretap ‘within the framework of the law’.

Official campaigns for Moscow’s early mayoral elections in September have begun, with candidates scrambling to get the correct number of signatures required in order to run.  ‘It seems that Russia is entering a new period—the establishment of a dictatorship.’  Less than half of senior finance professionals in Russia believe that their business prospects have improved this year.  8,700 police will be deployed in and around Moscow today to ensure order during Russia Day, which is to be widely celebrated despite recent reports that only half of Russians know the national holiday’s name.

The head of the Foreign Ministry says he has not received any information about U.S. whistleblower Edward Snowden seeking asylum in Russia, although other reports indicate that Russia extended an invitation for an asylum request from him.  The widow of Alexander Litvinenko says she will boycott his inquest in the U.K. if the British government does not set up a public inquiry into allegations of the Russian state’s involvement in her husband’s death.

PHOTO: A radical Orthodox believer (R) throws an egg at gay rights activists during a protest against a proposed new law termed by the State Duma as “against advocating the rejection of traditional family values” in central Moscow June 11, 2013. REUTERS/Maxim Shemetov