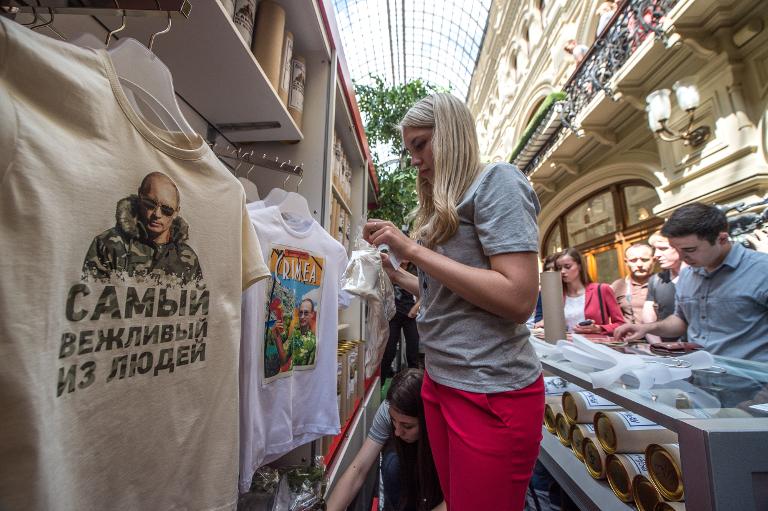 Following a fresh round of inconclusive negotiations, President Vladimir Putin said Ukraine’s insistence on its desired gas price amounted to a ‘dead end’, indicating that Moscow will make no further offers after Ukraine rejected Russia’s proposal to reduce its original asking price by over 20% (to $285 per 1,000 cubic meters), calling it a ‘trap’.  In addition, Prime Minister Arseniy Yatsenyuk said he wants alterations made to the original contract between Gazprom and Naftogaz.  Putin slammed Ukraine for rejecting an offer made ‘in a partnership spirit, aimed to support the Ukrainian economy’.  Russian Energy Minister Alexander Novak says Russia will not introduce advance gas payments for Ukraine if Kiev pays off $2 billion of its current gas debt by June 16.  U.S. based watchdog Freedom House says Russia is playing a key role in the decline of democracy among post-Soviet countries.  Crimea-themed t-shirts celebrating Putin’s conquest of the republic have appeared for sale in Moscow.  In a bid to prevent Visa and MasterCard from leaving the Russian market entirely, the Central Bank is proposing a reduction in the payments owed if the companies relocate their processing centers to Russia.

Konstantin Yankauskas, a former member of Alexei Navalny’s electoral team, has been placed under house arrest on suspicion of embezzling money from Navalny’s online campaign fund.  Two more of Navalny’s closest aides were also targeted for fraud, one of them put on a wanted list and another released pending trial. Former Prime Minister Mikhail Kasyanov called it a ‘bogus’ and ‘politically motivated criminal case against active opposition figures’. Human Rights Ombudsman Ella Pamfilova says she is not against rights activists in Russia working with Western colleagues, as long as they do not ‘pander or conform to them’.

According to the latest counts, at least 270 people have died in eastern Ukraine since the beginning of clashes.  Ukraine is at the forefront of global attention with regard to potential war with Russia, says Forbes, but Moscow is already at war with Chechnya, and has been since 1991.

PHOTO: A shop assistant packs one of the T-shirts with images of Russia’s President Vladimir Putin at a department store in central Moscow, Russia on June 11, 2014 (AFP Photo/Dmitry Serebryakov)