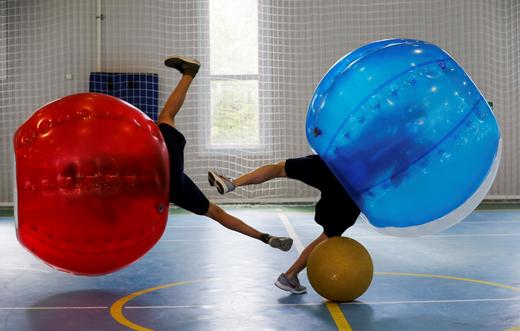 The US Treasury has added eight new sanctions (3 on individuals, 5 on entities) to its existing arsenal against Russia; these newest measures are being taken in retaliation against parties accused of helping the FSB to carry out cyber attacks and hacks on Western allies. Russia views the World Cup as a way to improve its standing on the global stage, argues the Independent. As major cities prepare to welcome football fans, a trade union representative said that police staffing is so stretched regarding security that criminals may benefit. The money spent on new stadiums across the country, each costing hundreds of millions of dollars, is benefiting Russia’s elite, says RFE/RL; investors for the Saransk stadium are reportedly neighbours and former schoolfriends. This year’s World Cup’s facilities, allegedly the most expensive ever, aren’t expected to generate much use or profit after the games are over. Ukrainian film director Oleg Sentsov, currently jailed in Russia on charges that he says are political, is planning to go ahead with his hunger strike this week whilst the country is in the spotlight with the World Cup.

It has been revealed that the Federal Tax Service, which employee almost a quarter of Russia’s entire federal labour force, is the country’s most expensive bureaucracy. This piece investigates Russia’s treatment of its HIV positive patients, “which critics have blasted as misguided, lackadaisical, and downright dismissive”, and its current alleged AIDS epidemic, which many say is thanks to the government’s failure to implement preventative measures.Russia’s oil production has exceeded OPEC limits for the first week of this month. Trade between France and Russia saw a 25% boost in the first three months of this year.

Japan is concerned by Russia’s plan to lay fibre-optic Internet cables for locals in the disputed Kuril Islands territory that Russia seized from Japan at the end of WWII. British Brexit backer Arron Banks is being asked to deny evidence of his ties to Russia during the UK’s referendum campaign.