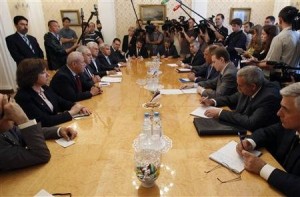 ‘The Syrian people are suffering because of Russia,’ says the head of the Syrian National Council, as a fleet of Russian warships head for Tartus.  Despite protests from online companies and proponents of free speech, a bill to create a ‘website blacklist’ to ban websites with certain extreme content has sailed through the Duma, and will become law after Vladimir Putin signs it.  ‘The problem is that it’s possible to technologically block off all of the platforms because of one particular situation, even though that’s not the purpose of the law,’ noted one official.

A delegation of Russians is in Washington to lobby against a U.S. bill that would sanction officials implicated in the death of Sergei Magnitsky, threatening that ‘it will become a real irritant in U.S.-Russia relations’, and presenting new evidence that, they say, proves Magnitsky’s involvement in tax fraud.  A new debit card from Alexander Lebedev’s National Reserve Bank will give a percentage of all transactions to opposition leader Alexei Navalny’s Anti-Corruption Fund.

Tajikistan is wrangling to improve the conditions under which Russia rents a military base on its territory, including a shorter rent period and raised prices.  The opposition are hoping to gather 10,000 people for their “Hot July” protest march at the end of the month.