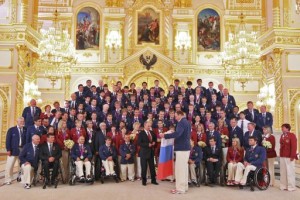 Under a decree signed by Vladimir Putin, the Kremlin has made it illegal for Gazprom (and all companies deemed ‘strategic’) to trade or exchange information with foreign entities without its permission, a move aimed at preventing any practices that are ‘capable of damaging the economic interests of the Russian Federation’, widely seen as a bid to protect Gazprom from the current European Commission investigation into its pricing practices in the E.U. because it implicitly forbids the company to co-operate with investigators.  Putin has called for a swift conclusion to the investigation, mixing reassuring statements about cooperation with a promise that Russia would ‘of course […] seek opportunities to sell our products in other markets’.  Gazprom itself accused the E.C. of using its investigation to ‘influence gas prices’.  The company is apparently looking to increase its stake in Germany’s Wingas – a move ‘likely to put the European Commission on alert’.  Putin has commented on U.S. Republican presidential candidate Mitt Romney’s view of Russia as ‘enemy No 1’, saying that his critical stance justifies Moscow’s ongoing opposition to U.S. plans to build a missile shield in Europe.

Moscow authorities have approved the opposition’s application for a permit to hold a March of Millions on September 15 for up to 25,000 people.  VTB has hit back at Alexei Navalny for making ‘deceitful, biased and groundless accusations’ after his joint publication, with a London-based think tank, of a report accusing the state-run firm of corruption.  A Troika Dialog analyst talks to Bloomberg about Russia’s stability in relation to the euro zone crisis.  Russia has raised its compensation claim against Bulgaria to $1.3 billion in relation to the cancelation of a 2006 contract for Atomstroieksport to build a nuclear power plant.

Yulia Latynina writes that the APEC summit cost Russia ‘a staggering $18 billion’, and argues that the summtit was ‘completely unnecessary’.

PHOTO: Russian President Vladimir Putin (bottom C) poses for a picture during a ceremony to award members of the Russian national Paralympic team, who took part in the London 2012 Paralympic Games, at the Kremlin in Moscow, September 11, 2012. REUTERS/Mikhail Klimentyev/Ria Novosti/Pool