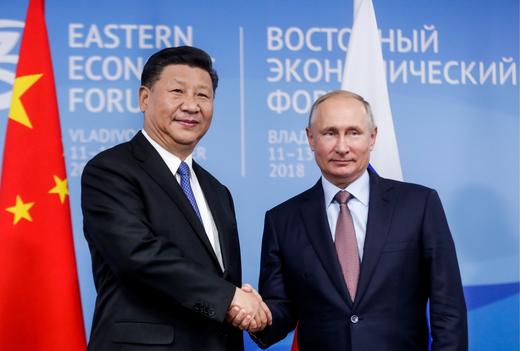 Russia’s relationship with China is in the spotlight today, as the largest joint military exercises in Russia’s post-Soviet history commence with China in the Far East, involving 300,000 personnel and evaluated by NATO as a demonstration of “Russia’s focus on exercising large-scale conflict”. Meeting his Chinese counterpart Xi Jinping on the sidelines of the Eastern Economic Forum, President Vladimir Putin praised their trusting relationship across the political, security and defence spheres, and spoke of increasing ties. During their meeting, Putin reportedly treated Jinping to Russian pancakes, caviar and vodka “in a show of warm personal ties”. At the forum, Chinese e-commerce giant Alibaba Group signed a $2 billion joint venture deal with Mail.ru, with the participation of the Russian Direct Investment Fund; and the Russia-China Investment Fund announced a joint investment for a technology park worth $1.28 billion. Russia and China are also working towards a deal that would implement a new transport route to take Russian gas to China. At the same forum, President Vladimir Putin directly addressed Japanese Prime Minister Shinzo Abe, urging him to sign a peace treaty before the end of the year “without any preliminary conditions”. Gazprom is revisiting plans to build a natural gas pipeline to South Korea across North Korea.

Viktor Zolotov, President Vladimir Putin’s former bodyguard and the head of the National Guard, has challenged opposition leader Alexei Navalny to a duel, promising to make a “juicy steak” of him as revenge for Navalny’s exposures of high-level corruption, the most recent of which accused the National Guard of diverting money away from soldiers’ sustenance. In quite a bellicose statement for such a public and high-level figure, Zolotov lumped Navalny into a category with (murdered opposition politician) Boris Nemtsov and former Yukos head Mikhail Khodorkovsky, accusing them all of plotting “to rip our state into pieces“. Theatre director Kirill Serebrennikov has been ordered to remain under house arrest (which he has been already for more than a year) until next month, despite his pleas at his custody hearing yesterday, and the fact that he has not yet been convicted of any crime.  Jailed Ukrainian filmmaker Oleh Sentsov’s is beginning to lose hope that his now four-month-long hunger strike will yield positive results. Russia has identified the two men accused by the UK of attacking former spy Sergei Skripal with a nerve agent, saying they are “civilians”, not criminals, and urging them to come forward to defend themselves publicly. Masha Gessen thinks Vladimir Putin is scared.

Sovcombank, which survived the past four years of a banking industry purge, is eyeing a possible IPO next year, the first significant IPO of a Russian bank in more than five years.