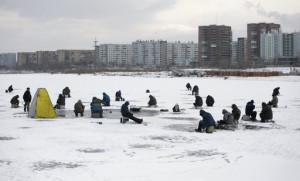 Maxim Luzyanin, one of 18 people on trial for protesting against the government on Bolotnaya Square on May 6, has been jailed for four and a half years for ‘participating in unrest’.  Alexei Navalny commented on the news of Luzyanin’s sentence, saying that it did not bode well for the rest of those detained. ‘The time has passed when [the Kremlin] were afraid to jail [opposition members] because they didn’t want people to think about ’37 [Stalin’s purge of 1937]’.  Moscow police have accused space contractor Russian Space Systems of using various schemes to steal $200 million in federal funds earmarked for the Glonass satellite navigation system.  Reports say Iraq has canceled a $4.2 billion deal to buy military jets, helicopters, and missiles from Rosoboronexport, citing possible corruption (although the report has been denied by the Iraqi official who negotiated the deal, suggesting that the deal is merely being reviewed).  If the deal, which would have made Russia Iraq’s number two arms supplier, has indeed been scrapped, Russia is unlikely to receive any compensation, says an analyst.

A Moscow rights group has taken information about the alleged torture of Leonid Razvozzhayev to the United Nations Committee Against Torture.  Yekaterina Samutsevich, the freed member of Pussy Riot, is to take part in federal proceedings that will determine whether or not a video of the group’s Punk Prayer should be deemed ‘extremist’.  The United States has turned down a request that convicted arms dealer Viktor Bout be returned to his native Russia.  Russia is to join an international investigation into the death of the first Palestinian president, Yasser Arafat.

An energy analyst says it is unlikely that Gazprom will cut its prices for Ukraine, because the company’s ‘revenues and net profits are under such strain’, and because Ukraine does not have the political backing of the E.U. that helped Poland, Germany and Italy win discounts from the gas giant.  Rosneft’s acquisition of TNK-BP means it will never be privatized, says Luka Oreskovic.  Mobile phone company MegaFon is likely to go ahead with a London IPO this year, says Reuters, after receiving ‘an unofficial green light’ from the U.K. regulator.

PHOTO: People fish through holes in the ice on the Yenisei River in the Siberian city of Krasnoyarsk November 11, 2012. REUTERS/Ilya Naymushin