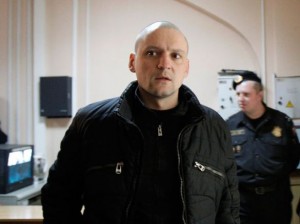 Investigators have raided the apartments of opposition activists Sergei Udaltsov, Leonid Razvozzhayev and Konstantin Lebedev as part of the criminal case into an alleged plot by the men to instigate riots across Russia.  Investigators claim to have found evidence that opposition activists received some funding from Georgian politician Givi Targamadze.  Vladimir Putin is expected to highlight the ills of corruption in today’s state of the nation address, but he will have to contend with the fact that ‘these public events are less effective than they used to be.’   Brian Whitmore considers how Putin can really extirpate graft when it is a systemic part of the state.  The President has been criticized by rights groups for comparing Lenin’s remains to those of saints, in another example, Bloomberg says, of his recent deployment of Soviet nostalgia.

United Russia deputy Vitaly Milonov plans to take legal action against pop singer Lady Gaga for her show of support for the LGBT community at a St Petersburg concert.  The son of slain journalist Anna Politkovskaya has expressed fears that the investigation into her murder will fail to bring her killers to justice.

Moscow has voiced disapproval of the U.S.’ decision to recognize a Syrian opposition coalition as the legitimate representative of the Syrian people.  United Russia will propose naming a sanctions list of U.S. citizens the ‘Dima Yakovlev List’, after the Russian child who died of neglect at the hands of his adoptive American parents.  Global Trends 2030, a report by the US National Intelligence Council, has found that Russia is in ‘slow decline’ in relation to developing countries.  Gazprom has apparently re-ignited its long-stalled talks with China.  The gas monopoly is the world’s most profitable energy company, so why are its investors unhappy?