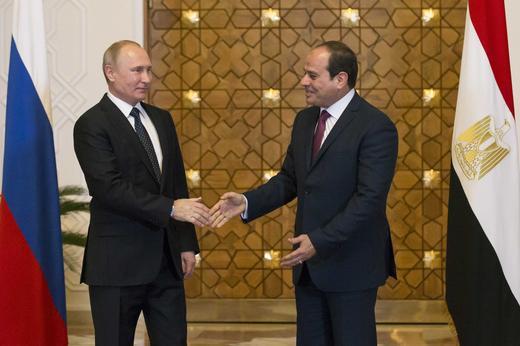 Making a surprise visit to Syria, President Vladimir Putin ordered a withdrawal of “a significant part” of Russia’s military contingent, having praised the Russian and Syrian armies for having “defeated the most battle-hardened group of international terrorists”. A Pentagon spokesman said Russia’s comments “do not often correspond with actual troop reductions”, and it was reported that Russia will keep its air base and naval facility in Syria permanently. Putin then made “celebratory” visits to Egypt and Turkey. Following talks with Egyptian president Abdel Fattah al-Sisi, Vladimir Putin announced that Russia will resume direct flights to Egypt, after a two-year suspension. The pair also signed an agreement for Rosatom to build a $21 billion nuclear plant in the country. The New York Times reviews their relations. The Central Bank has bailed out Otkritie Bank, taking more than a 99% stake.

Putin has presented a state award to veteran human rights activist Lyudmila Alexeyeva for “outstanding achievements in the protection of human rights in 2017”; Alexeyevna has spent decades criticising his rule, prompting suspicion that he is attempting to lessen her criticism of him as he prepares for a new term. Putin has yet to decide on whether or not he will run for his next presidential term with a party or as an independent candidate. Either way, he will be victorious: “The election itself does not matter at all,” said one analyst. This piece argues that “apathy and disappointment” rule Russia, given the current extent of its political stagnation. Russia would abolish its tit-for-tat measures against US media outlets if the US does the same. An anonymous survey conducted by the Prosecutor General’s office found that a quarter of Russians pay bribes to officials.

Prominent Russian athletes say they are willing to compete in the upcoming Olympics as neutral participants. A group of ultra-nationalists reportedly threatened a documentary filmmaker at a Moscow film festival over her film about the conflict in eastern Ukraine. The ballet directed by Kirill Serebrennikov has made its premiere at the Bolshoi Theatre, even as Serebrennikov is under house arrest.