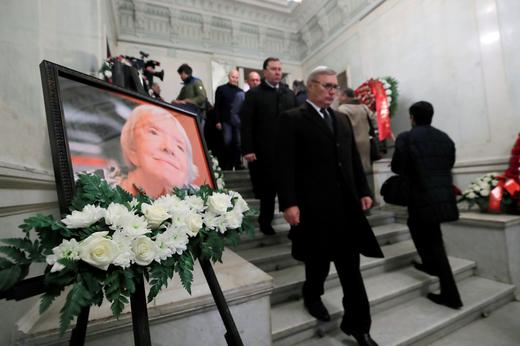 The funeral of rights activist Lyudmila Alexeyeva drew politicians, opposition activists, and foreign diplomats. Tanya Lokshina remembers “Grandma Lyuda”. President Vladimir Putin was accused of hypocrisy for attending her wake, and the absence of fellow activist Lev Ponomaryov, jailed over an online call for a rally, was noted as a cruel irony. Putin yesterday unveiled a new statue dedicated to Soviet dissident Alexander Solzhenitsyn on what would have been his 100th birthday, praising the writer as “a true and real patriot” who stood up to “Russophobia”. Human Rights Watch says that the 2013 law against “gay propaganda” is catastrophic for Russia’s LGBT youth, shutting down support groups and online resources, and intensifying harassment and violence against LGBT people. A new survey found that almost half of Russian women believe they are most at risk of violence in their own homes. Today is the 25th anniversary of the Russian Constitution.

Viktor Zolotov, the chief of the National Guard, is suing opposition leader Alexei Navalny for slander (Zolotov had earlier challenged Navalny to a duel). Vladimir Putin says he knew nothing about alleged spy Maria Butina until she was arrested, and doesn’t understand why she is facing charges. “Nobody knows anything about her.” The President’s old East German secret police identity card has been uncovered in a Dresden archive. Roscomnadzor has fined Google $7,350 for failing to comply with Russian requirements to remove certain entries from its search results.

Total, the French oil group, is expanding annual capacity of its Yamal LNG project ahead of schedule, saying that it has enough demand.