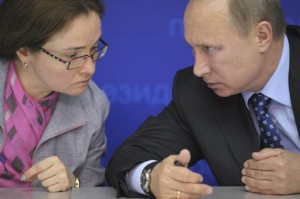 President Vladimir Putin named Elvira Nabiullina as the new head of the central bank, which will make her the first female central banker for a G8 country. Critics suggest that ‘loyal technocrat’ Nabiullina will show no independence from Putin.  A Washington analyst called her ‘a safe pair of hands […] very much a part of the liberal democratic establishment in Moscow’.  Key Kremlin staff wages have been almost doubled, a bid to get them in line with those of military and security officials, according to Putin’s spokesperson, Dmitry Peskov, who also pointed out that the higher wages came at the expense of certain perks.  The Guardian reports on the Kremlin’s ongoing ‘renovation’ that has seen it lose its ‘most egregious offenders’ in recent months.  This includes a slew of officials who have been accused of plagiarism.  A new think tank survey suggests that only 5% of Russians believe that their government officials tell the truth, whilst separate research says that Putin will likely be unable to fulfill all of his pre-election promises, given that the current pace of reform cannot support economic growth of 5-6%.  New proposals discussed by Prime Minister Dmitry Medvedev’s cabinet would force strategic companies to reveal their beneficiary owners.

The European Court of Human Rights has recorded a drop in pending cases, leading Russian human rights advocates to blame the dip on a concerted effort to send Kremlin-backed lawyers to Strasbourg to vet cases.  ‘It is no coincidence that this sharp decrease took place when a group of Russian lawyers started working there.’  The business and human rights ombudsmans are lobbying Vladimir Putin to change existing rules about the maximum time that suspected criminals can remain in pretrial detention, using the case of Iosif Katsyv, who has spent five years in detention since his arrest, as an example.  The Federal Antimonopoly Service has found that a complaint by Alexei Navalny about a St. Petersburg shipyard violating regulations over a steel supply tender was valid.  Russia is considering establishing nuclear explosives in space to combat meteorites.  Kyrgyzstan says it expects to reach a final agreement on the sale of its natural gas network to Gazprom by the end of the month.

Over 300 members of the Bolshoi Theatre have signed an open letter in support of Pavel Dmitrichenko, accused of orchestrating an acid attack on Sergei Filin, blaming ‘unconvincing’ evidence for the ‘absurd’ conclusions of the investigation.  VTB has raised $2 billion in loans from international lenders for general corporate purposes.