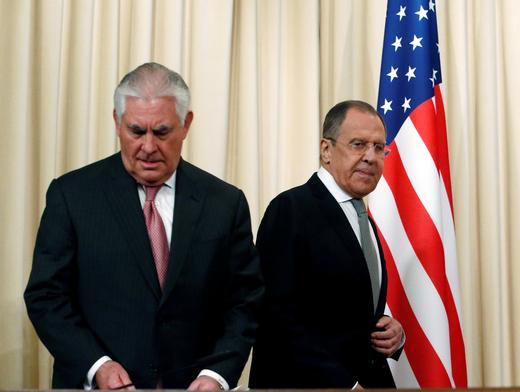 President Vladimir Putin and Foreign Minister Sergei Lavrov both met with US Secretary of State Rex Tillerson yesterday for a “frank” 2-hour discussion, who said that both sides agree that relations are currently at a low. “The world’s two foremost nuclear powers cannot have this kind of relationship,” he said. Both sides agree on the need for a stable Syria, the prevention of terrorism, and the denuclearisation of North Korea, but still differ on “a broad range of issues”. Tillerson says Russia must push Syrian President Bashar al-Assad out of office “in an orderly way”. Putin says it seems that Russia’s working level of trust with the US has “most likely worsened” since Donald Trump took office. A US-Russia working group is to be set up to take steps towards mending ties. How will Russia take Trump’s reversal of his position on NATO? Anti-corruption activist and opposition leader Alexei Navalny is calling for a second round of country-wide anti-government protests on Russia Day, June 12. As Russia begins to gear up for next year’s presidential elections, record number of Russians (52%) are turning away from politics, according to the Levada Centre.

Russia vetoed a “misconceived” United Nations Security Council resolution on last week’s alleged chemical weapons attack in Syria, prompting the US ambassador to accuse it of “isolating [it]self from the international community”. Vladimir Safronkov, Russia’s deputy ambassador to the UN, barely contained himself during an outburst at his British colleague during the session, accusing him of attempting to undermine cooperation between Russia and the US and warning, “Don’t you dare insult Russia again!”

Sergei Mamaev, a former deputy director at MiG, is the second suspect to be arrested on charges of embezzling millions of dollars from the aircraft manufacturer (the first suspect was murdered in pre-trial detention in a case currently being investigated as a possible contract killing). Rosneft is blaming reports that Ramzan Kadyrov and Igor Sechin were engaged in conflict on a false news source allegedly backed by former Yukos head Mikhail Khodorkovsky.