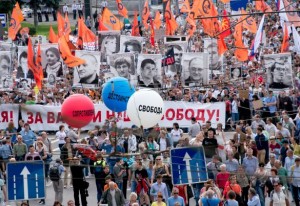 Thousands of opposition activists marched in Moscow yesterday for Russia Day, calling for an end to President Vladimir Putin’s rule and the release of all political prisoners.  Protesters carried placards bearing images of Bolotnaya Square prisoners, Pussy Riot, and Mikhail Khodorkovsky, and chanted ‘Putin is a thief!’  Police (‘known for giving derisory estimates‘) said 6,000 protesters joined; organisers said they gathered 30,000 (drawing more reasonable estimates of 10-15,000).  Alexei Navalny and his wife led the protest with a large banner reading ‘For your freedom and ours’, and protesters reportedly called for his election as Moscow mayor, chanting ‘Navalny is our mayor’.  Both RFE/RL and Novaya Gazeta posted videos of the march.  As his citizens marched against him, Vladimir Putin’s pro-Kremlin All-Russia People’s Front movement held its founding conference, at which it was announced that Putin had been ‘elected’ its leader.  The organisation announced its goal as being ‘to unite people across the ideological spectrum’.

Acting Moscow Mayor Sergei Sobyanin is calling for tougher measures against illegal migrants, complaining that municipal authorities are not currently allowed to ‘punish, deport or arrest’ them.  Regarding Sobyanin stepping down from his post and forcing an early Moscow Mayor election, Georgy Bovt asks: ‘If the gap between Sobyanin and his rivals is so large, why is he in such a rush to hold an early election?’  Regarding the race, Bloomberg notes that: ‘Even if Prokhorov and Navalny are allowed into the race, they might not stand much of a chance because the incumbent [Sobyanin] is genuinely popular.’

Germany condemned Russia’s new law – unanimously passed in the Duma yesterday in bill form – which bans ‘homosexual propaganda’ on a nationwide basis, with the German Foreign Minister saying that such a law had no place in a democratic country, and Chancellor Angela Merkel condemning it.  But Russia says it will press on with the law regardless: ‘This call will not be heart  A heated conflict of values is coming.’  The Atlantic says that much of Russia’s homophobia correlates with its Orthodox values.  Putin has appeared on the Kremlin website in a video in which he makes an English-language pitch for Russia to host Expo 2020. RFE/RL calls Putin’s delivery ‘wrenchingly stiff’ and ‘painfully self-conscious’.

Rosneft has agreed with ExxonMobil to create an Arctic Research Center in Washington, D.C., and announced that it would change the name of TNK-BP to RN Holding.  For the first time in years, BP cut its global natural gas reserve estimate, ‘sharply’ revising down its estimate of Russia’s classified holdings.  Media tycoon and billionaire Alexander Lebedev is in talks to sell his 4.5% stake in Aeroflot.