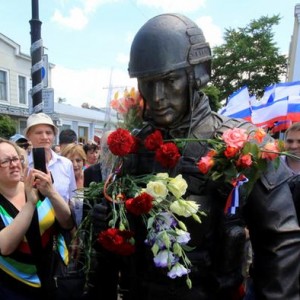 UEFA has decided to launch proceedings against the Russian Football Union after violent clashes between Russia fans and those of rival team England at the weekend’s Euro 2016 match.  Both teams have been threatened with disqualification, whilst Russia also faces charges of crowd disturbances, racist behavior, and launching fireworks.  Sports Minister Vitaly Mutko supports the footballing body’s decision.  The former chairman of opposition party Parnas, Andrei Pivovarov, has been found guilty of bribery and illegally accessing a police database in what he and rights group Memorial claim to be a politically motivated case.  Indefatigable opposition deputy Ilya Ponomarev, the only deputy in the State Duma to have voted against the annexation of Crimea, has been stripped of his voting powers by the duma for failing to fulfill his duties.  The number of people trying to leave Crimea has increased considerably this year, the Telegraph reports, as an ‘atmosphere of fear’ prevails.  The authorities on the peninsula have unveiled a statue of an armed Russian soldier in an attempt to polish the ‘brand’ of the forces that took the region back from Ukraine.

As part of a campaign to limit excessive drinking, the Duma has passed a law limiting the size of a plastic beer bottle to no more than 1.5 laters.  A poll has found that in 2015, around 350,000 people left Russia, a number ten times higher than five years previous, fuelling suggestions that the nation is a facing a new brain drain.  The Central Bank has lowered its key interest rate by 0.5 percentage points to 10.5%, the first decrease since August 2015.  News aggregators will be held to account for spreading false information courtesy of a bill that has been unanimously accepted by lawmakers.

The legacy of Sergei Magnitsky, the anti-corruption lawyer who died in a Russian prison cell in 2009, has once more become a battleground for the Kremlin and its fiercest critics, among them Magnitsky’s former employer, investor Bill Browder.  According to Foreign Minister Sergei Lavrov, a new documentary about his death confirms ‘that the death of Sergei Magnitsky was all the result of enormous trickery by this . . . Browder, who is an unscrupulous swindler.’   The Minister of Labour and Social Development, Maxim Topilin, has announced plans to make it compulsory for Russian officials to swear an oath to fight corruption and avoid self-interest.

PHOTO: A new statue of a Russian soldier is unveiled by authorities in Crimea. (Reuters/P Rebrov)