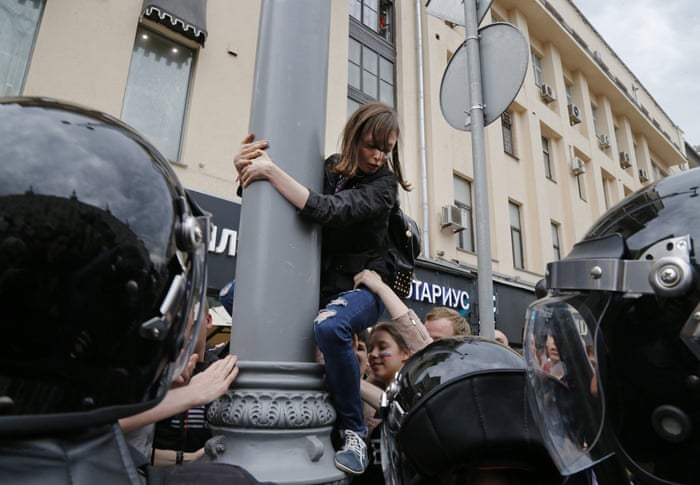 Some 5,000 people marched in Moscow, 3,500 (or more, depending on the source) in St. Petersburg and hundreds of others in over 100 demonstrations across the country for Russia Day yesterday, with protesters calling for the government to be held accountable for corruption. The protests, called for by opposition activist Alexei Navalny, led to over 1,000 detentions (500 in St Petersburg alone), many of them young people in their teens and twenties, “pull[ed] out at random”. One 18-year-old attendee said, “I came here because we have no democracy, our Parliament is not real, our politicians are not real and our mass media is not real.” The detentions have drawn criticism from the European Union, the United States, and Amnesty International. Navalny, who was detained before he could even get to the event, was sentenced to 30 days in jail for organising the rally. Bloomberg notes that few Russian news outlets dared to cover the protests, although TASS reported that the original, authorised (and much smaller) version of the protest “ended as scheduled, with no incidents”. Sputnik reported only on the Moscow arrests, giving no attendance numbers and estimating the number of those detained at just 150. Videos of the protests and detentions are up at RFE/RL and the Guardian.

The White House has completed its new legislation on anti-Russia sanctions, adding new ones and preventing existing sanctions from being suspended without congressional approval. US Defense Secretary Jim Mattis says he sees no indication that Russia wants a positive relationship with America, accusing Putin of choosing to be “a strategic competitor”. Director Oliver Stone spoke to the LA Times about his Putin interview project, and defended his approach. “By listening to him, we may not agree with it, but it’s important we hear it.” Stone believes that Putin is unfairly vilified by Western media. TASS picked up on Stone’s comment that “the US and Russia could be great partners,” and his question, “Why has it deteriorated to this point?” In the clips sent to the media ahead of the broadcast next week, Putin tells Stone that he once considered the possibility of Russia joining NATO, but that it made the US “very nervous”.

Russian hackers are now capable of causing large-scale power outages, new research suggests. The Kremlin denies that a $1 million luxury watch coming up for auction in Monaco, engraved with Vladimir Putin’s name, has anything to do with the President.

PHOTO: A protester is pulled down from a lamp post during a demonstration in Moscow, June 12, 2017. (Alexander Zemlianichenko/AP)