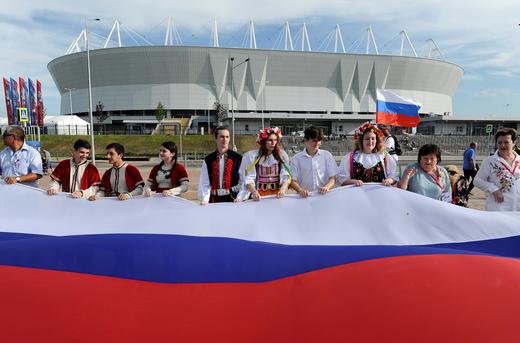 The Foreign Ministry responded to news of new US sanctions against Russia, slamming it as a “fruitless” attempt to increase pressure that will yield “zero” results; it was particularly offended that the latest sanctions were announced on the eve of Russia Day. The State Duma is seeking to amend existing laws that would allow state firms to avoid incurring US sanctions by withholding some of their information. Part of the US’ reason for the new sanctions is that, as far as it is concerned, Russia is “tracking undersea communication cables” that allow global Internet connectivity, but RFE/RL argues against the likelihood of this, and refutes the notion that the cables are vulnerable. Existing US sanctions have pressured Oleg Deripaska into postponing his fraud lawsuit against former Trump campaign manager Paul Manafort. Police in Vladivostok broke up the founding gathering of a regional branch of Open Russia, the civil society group established by exile and former oligarch Mikhail Khodorkovsky; activists were detained, including the coordinator of opposition leader Alexei Navalny’s Vladivostok office. Open Russia was declared an “undesirable” under a controversial 2015 law. Western politicians may be wary of engaging with Russia at the moment, but investors are considerably less wary, as oil prices are giving its a revenue boost, its currency has stabilised, and its inflation is well below the Central Bank’s target.

The UN Secretary-General will attend a World Cup soccer match in Russia next week, and meet with Vladimir Putin, Foreign Minister Sergei Lavrov, and Orthodox Church head Patriarch Kirill. Putin will attend FIFA’s governing body congress in Moscow later today, where the 2026 host will be elected; the first World Cup match kicks off tomorrow. The head of Europe’s anti-racism watchdog FARE is warning fans of Russia’s “difficult environment” with regard to racism and homophobia. British singer Robbie Williams is being accused of having sold his soul for agreeing to perform at the World Cup opening ceremony, due to the nerve agent attack on former spy Sergei Skripal earlier this year.

The Foreign Ministry responded positively, broadly, to North Korean leader Kim Jong-un’s meeting with US President Trump, although noted that “the devil’s in the details”. The European Court of Human Rights (ECHR) ruled that Russia wrongly revoked the residence permit of American human rights activist Jennifer Gaspar in 2014, and ordered it to pay her $16,000 in compensation.

PHOTO: People take part in the Day of Russia celebrations near the the Rostov Arena, which will host matches of the 2018 FIFA World Cup, in Rostov-on-Don, Russia June 12, 2018. REUTERS/Sergey Pivovarov