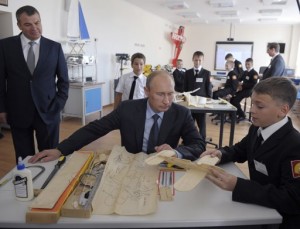 At a meeting with activists yesterday, Prime Minister Dmitry Medvedev called for the early release of the jailed members of Pussy Riot, saying that their already-completed jail time was a serious punishment in itself – despite his own disgust at their actions.  Medvedev said he was ‘sickened by what they did, by their looks, by the hysteria that followed what happened.’  The group’s lawyer responded by noting that Medvedev’s comments on criminal cases have never led to action.  Meanwhile, a state-run television channel has claimed that exiled businessman Boris Berezovsky financed the band in order to foment Russian unrest, and that their international supporters have been paid to speak up in their favour, using his funds.  Berezovsky denied the claims: ‘But if I had thought up such a project, I would have been very proud.’  President Vladimir Putin has defended his new media censorship laws, saying that their main aim is to ‘protect children’.  Foreign Minister Sergei Lavrov has expressed shock over the death of the U.S. ambassador to Libya in Benghazi yesterday, saying it underscored the need for ‘joint efforts of our countries’.

Deputy Prime Minister Arkady Dvorkovich says he is opposed to Rosneft taking a stake in TNK-BP: ‘Overall, it serves no useful purpose for any state company to expand its role in the economy.’  Analysts discuss the current E.U.-Gazprom price row, as Russia puts the pressure on Moldova, offering it cheap gas in exchange for its abandoning a commitment to adopt European energy liberalising measures.  ‘[T]here’s a gap as wide as the Volga between Russian ambition and reality […] Lavish expenditure on bridges, roads and a new airport cannot hide the fact that Russia’s far east is decades behind much of Asia.’  Plans to build a nuclear-powered icebreaker could attract more foreign commercial shipping companies, suggests one analyst.  The Kremlin is co-sponsoring irrigation systems that help farmers deal with drought, which has cost Russia an estimated $638 million this year.  Ukraine has introduced a recycling fee on cars imported from Russia, imitating a similar move made by Moscow last month, and spurring talk of a trade clash.

The Other Russia reports on the weekend’s anti-capitalist protest in Moscow.