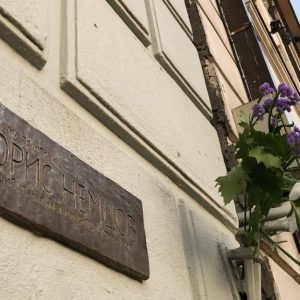 TODAY: Authorities mulls what to do with Nemtsov commemorative plaque; Golos reports on distrust and irregularities in weekend’s election; Jehovah’s Witnesses appeal on extremism; Turkey signs monumental arms deal with Russia; RT affiliate forced to register as foreign agent in US; film drawn from screen after threats from extremists.

It was up for less than a week before members of the pro-Kremlin SERB movement took it down – now the Moscow authorities are suggesting that a plaque honouring murdered opposition leader Boris Nemtsov be placed within the entrance of the building in which he lived, as opposed to on its front. Independent election monitoring group Golos says that the reason for low turnout at regional and local elections last weekend was “the low level of competition and by voters distrust toward the election process”. The organisation also found complaints of election rigging from multiple polling stations. Reuters reports from such a station, where its reporters counted 256 voters cast and official figures claimed 1,867: “that is more than seven times higher than the number of voters counted by Reuters – with 73 percent of the votes going to United Russia”. As Putin gears up for the presidential elections next March, “the plight of his working-class base across the Russian heartland is emerging as a top domestic challenge”, says Bloomberg. Prominent left-wing activist Sergei Udaltsov, fresh out of prison for organising opposition demonstrations, has apparently been detained. The Jehovah’s Witnesses religious group has appealed against the Supreme Court’s decision to label it an extremist organisation.

Turkey has signed an eye-brow raising deal with Russia to buy nearly $2.5 billion worth of anti-aircraft missiles; as a NATO member Ankara is supposed to only purchase systems from fellow members. One of the American affiliates of Kremlin-backed TV network RT has apparently been ordered by the US government to register as a ‘foreign agent’ under anti-propaganda laws. Leonid Bershidsky explains why the European External Action Service East Stratcom Task Force, the EU agency designed to counter the Russian propaganda machine, is an “exercise in futility”. Russia’s Kaspersky Lab cyber-security firm may shut its Washington D.C. branch as it faces increasing pressure due to alleged ties to Russian security services. The United States and Russia are apparently still in agreement that the 2010 nuclear arms-reduction treaty plan must be implemented, and discussions to do so will soon be underway.

Following threats against its cinemas from religious extremists, Russia’s leading movie theatre chain has decided it will not screen Mathilde, a controversial film about Tsar Nicholas’ affair with a Polish ballerina.

PHOTO: A plaque to commemorate slain opposition leader Boris Nemtsov, on the house in which he lived. (Moskva News Agency)