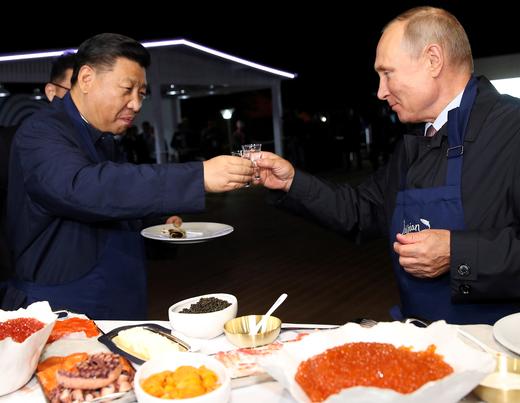 Pyotr Verzilov, an activist with the Voina art group, and occasional member and spokesman for the Pussy Riot protest group in the past, is being treated in the toxicology section of a Moscow hospital, prompting speculation that he was poisoned. Verzilov was one of the three activists jailed earlier this year for storming the pitch at the World Cup final wearing a police uniform. President Vladimir Putin spoke up in defence of North Korea, saying that it is taking steps towards denuclearisation that are being ignored by Washington, which is instead calling for full disarmament. He said the country should be given reciprocal security guarantees in exchange for the progress it has already made, rather than “endless demands”. He has extended an open invitation to Kim Jong Un to visit him at his convenience. Vladimir Putin says Moscow needs to diversify the foreign currencies it uses in international trade, and reduce dependence on the dollar. The head of VTB is warning that due to proposed sanctions, Russians with dollar bank accounts may only be able to withdraw their money in other currencies.

Ukraine’s appeal against its $3 billion bond repayment with Russia is being heard in the UK Court of Appeal. Ukraine is arguing that the bond, which was sold on the eve of the 2014 Kiev revolution, was an unlawful aggression from Moscow. European lawmakers have nominated jailed Ukrainian filmmaker Oleh Sentsov for the Sakharov Prize, calling his imprisonment “illegal“. State television channel Rossia-24 is in contact with one of the men accused in the Sergei Skripal poisoning, saying that he is a pharmaceutical employee in Siberia, and that he may be willing to comment on the allegations next week. The New York Times notes that the last time the UK accused a Russian of assassination, he was appointed to a seat in parliament. Russia is calling on the United Nations to lean on London to stop isolating Yulia Skripal, who has been kept in a secret location for over six months.

Japan rejected Vladimir Putin’s surprise offer of a peace treaty by the end of this year, saying that the territorial issue of the Kuril Islands must be resolved first. An ecological law organisation is calling on Sweden to block the construction of the Nord Stream 2 pipeline on the grounds that it will negatively impact marine life in the Baltic Sea. A notorious Russian spammer has pleaded guilty to US charges.

PHOTO: Russian President Vladimir Putin and Chinese President Xi Jinping toast during a visit to the Far East Street exhibition on the sidelines of the Eastern Economic Forum in Vladivostok, Russia September 11, 2018. (Sergei Bobylev/TASS via REUTERS)