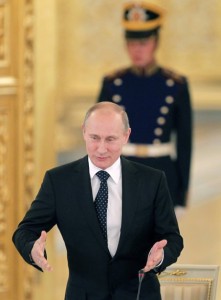 President Vladimir Putin’s human rights council lost 12 pre-existing members and gained 39 new ones in its latest shuffle.  The council’s former head, Ella Pamfilova, said that the expanded panel would make it ‘unclear whose voice will be taken into account and whose will not,’ and citing ‘controversial individuals’.  New members include Liliya Shibanova, of the Golos electoral monitoring group, journalist Leonid Parfyonov, and former presidential candidate Irina Khakamada.  The Washington Post discusses the Kremlin’s new Internet filtering policy, anticipating that it will slowly and increasingly be used to silence independent speech.  Two popular websites ‘crucial to Russia’s Internet subculture’ have just been banned.  Putin insisted yesterday at the first meeting of his new rights council that ‘Everything that is done in Russia is designed to make our country more effective and stable.’  What happened to the modernisation plan, wonders Mary Dejevsky.  Boris Kagarlitsky wants to know why investigators searched his home last week.  Details of Leonid Razvozzhayev’s disputed confession have been revealed – apparently the activist said that his actions were financed by the Georgian political elite.

Kremlin chief Sergei Ivanov says he knew about the alleged embezzlement of funds at Russian Space Systems for years, and that he kept silent in order to prevent the culprits from covering their tracks.  Russia has been able to set the price of gas in Eastern Europe thanks to its Soviet pipelines, says this piece, but the E.U. Competition Commission aims to change that.  Germany’s energy independence from Russia may make Chancellor Angela Merkel more willing to raise human rights issues at her meeting with Putin this month.  Russia is to expand the role of private contractors in its defense sector, according to Deputy Prime Minister Dmitry Rogozin, who says this will increase competition and boost new ideas.

The former deputy head of Rosneft, accused of embezzlement, has been released on $160,000 bail.  Putin’s spokesperson, Dmitry Peskov, continues to deny rumours that his boss is suffering from a serious crane-related back injury.  This piece compares the affair scandals of former defense minister Igor Serdyukov and David Petraeus.  Moscow’s new 24-hour English-language radio station, Moscow FM, has begun broadcasting, with the aim of ‘making Moscow more accessible to foreigners’.