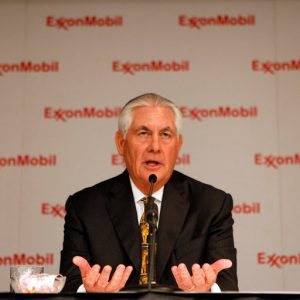 U.S. Senate Majority Leader Mitch McConnell has announced that Congress will undertake an investigation into the CIA’s assertions that Russian hackers helped propel Donald Trump to the Presidency. Those who hope that the investigation will yield results should exercise caution, says the Guardian, as McConnell ‘left the scope of such an inquiry vague’. Trump supporters have dismissed allegations of Russian involvement as a ‘conspiracy theory’. President Putin’s spokesman Dmitry Peskov has rebuffed criticisms surrounding Donald Trump’s hopes to award Putin-friendly Exxon Mobil CEO Rex Tillerson with the job of Secretary of State, downplaying allegations of conflict of interest, which are considerable, and detailed here. Moscow and Washington are still at odds over Syria however, with Russia blaming the U.S. for a lack of cooperation in fighting I.S., prompting the loss of Palmyra to the extremist group over the weekend. Washington has decried Russian moves in Aleppo, which Al-Assad is on the point of regaining, as ‘unacceptable’.

In a fillip to the European Union, Foreign Minister Sergei Lavrov says the Kremlin is willing to donate military equipment to longest-standing ally Serbia, to counter NATO’s arms buildup in neighbouring Croatia, as tensions between the two countries rise.  Lavrov is unhappy that new instructions from the EU mean that European nations must refer to  the ‘occupation of the Donbass’ and to Crimea as an ‘annexed’ peninsula. ‘The Crimean peninsula, annexed by Russia in 2014, has swiftly degenerated into the scene of the greatest repression being conducted anywhere in the entire country,’ warns this article on the plight of Crimean Tatars.  The Kremlin has refused to comment on the statements made in an interview by former Soviet president Mikhail Gorbachev who says that, whilst the U.S.S.R is no more, ‘a new Union can be established. In the former borders, with the same members, on the basis of free will’.

Russia and Iran are deepening ties with two agreements, on power plant construction and electrification of railways, worth $2.2 billion. Gazprom Neft has also signed an agreement with Iran’s state oil company to study the potential for oil production from two fields.  The Moscow Arbitration Court has ruled that the RBC media company must pay $6,375 in damages to Rosneft over an article it published on the state-controlled oil company’s director, Igor Sechin, and retract the text.  Whilst the decision was welcomed as it stopped short of making the company pay the $52 million Rosneft sought for defamation (which would have bankrupted it), it will nonetheless be appealed, say RBC lawyers.