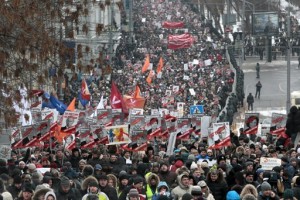 Yesterday’s ‘March Against Scum’, held in Moscow to protest the ban on U.S. adoptions of Russian orphans, drew thousands of supporters in ‘the most prominent expression of public anger [against the measure] thus far’. Police estimate that 9,000 people marched; opposition leader Sergei Udaltsov put the number at over 50,000.  ‘[T]his law is a worse thing to do to those children than the treatment animals get in other countries,’ said one of the organisers.  RFE/RL has video from the march, at which nine people were detained.  In response, Kremlin spokesperson Dmitry Peskov said that protesters were ‘absolutely right’ to express their concerns about the fate of orphans, and said that the ban constituted ‘an intention to create necessary conditions [for ease of adoption] in this country’.  A U.S. political science professor suggested that the ban could be part of a strategy to boost Russia’s diminishing demographic.  Originally questioned as a witness, Former Defense Minister Anatoly Serdyukov faces being considered a suspect in the Investigative Committee’s fraud investigation of the sale of Defense Ministry real estate.

Foreign Minister Sergei Lavrov says Syrian President Bashar al-Assad’s exit cannot be a precondition for a deal to resolve the country’s crisis, and repeated calls for opposition fighters and leaders to seek dialogue.  New Russian citizen Gerard Depardieu is weighing in against Putin’s political opposition, saying that it has ‘no program, nothing’, and commenting with regard to Garry Kasparov that what ‘works well for chess is completely unsuited to politics’.  He also attacked foreigners for criticising the prosecution of Pussy Riot, saying that, if the band had performed in a mosque, ‘they would not have come out alive’.  Sergei Polonsky may be released from detention in Cambodia after his lawyers agreed to pay compensation to the victims of his alleged attack.

Vladimir Putin marked the professional holiday of the Russian Press with congratulations for ‘the media’s great role’; Dmitry Medvedev praised journalists as crucial to the exercise of fundamental democratic rights.  The Investigative Committee has opened an investigation into opposition blogger Rustem Adagamov over allegations that he abused a young girl.  Leading Russian defense lawyer Yuri Schmidt will be buried in St. Petersburg on January 16, following his death on Saturday.  The BBC has video images of the ongoing eruption of a volcano on the Kamchatka Peninsula, which is expected to go on eruption for four months.