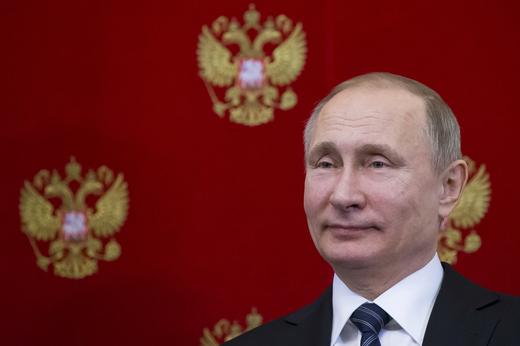 French presidential candidate Emmanuel Macron says his campaign is facing thousands of cyber attacks and fake news tactics from Russia; Kremlin media outlet Sputnik ran an interview accusing him of being an agent of ‘the big American banking system’.  The Moscow Times rounds up the latest Kremlin propaganda from Vesti Nedeli, including a growing admiration for far-Right French candidate Marine Le Pen, and Dmitry Kiselyov’s dismissal of the rumour that Russia was planning to hand Edward Snowden over to the States.  Travellers from at least 94 countries are showing 17% less interest in visiting the U.S. now that Donald Trump is president – but not Russia, U.S. flight searches from which have apparently risen by 88% since Trump’s election.  Foreign Minister Sergei Lavrov says Moscow is hoping for closer cooperation with the U.S. on Syria.  Leonid Bershidsky argues that NATO limits Russian influence to soft power, and that increased Russian activity in Armenia, Moldova, and Balkans is about trying to make gains on already-existing anti-NATO sentiment there.  Conservationists and locals in St. Petersburg are up in arms over the decision to gift the city’s iconic St Isaac’s Cathedral to the Orthodox Church. Dozens protested in Moscow earlier this week against the decriminalisation of domestic violence.

Vyacheslav Volodin, Vladimir Putin’s former deputy chief of staff, said that it is ‘necessary’ to create new laws that protect the President’s honour and dignity – laws which, he says ‘already exist everywhere’; his statements were supported by Kremlin spokesman Dmitry Peskov.  Moscow authorities have approved the construction of an exclusive health clinic that will only treat high-level Kremlin officials, including the President; in its defence, the Kremlin said the clinic would service ‘hundreds of state officials’.  Russia’s sugar industry is on the verge of becoming a net exporter, having turned itself around in the past decade. The Kremlin is considering beginning its monopoly on alcohol with the perfume and pharmaceutical industries. Rospotrebnadzor, the Consumer Protection Agency, wants to prohibit the use of hookahs and vaping mixtures.

A photo of the murder of the Russian ambassador to Turkey last year won the World Press Photo Contest.  The judging chair says he voted against it.