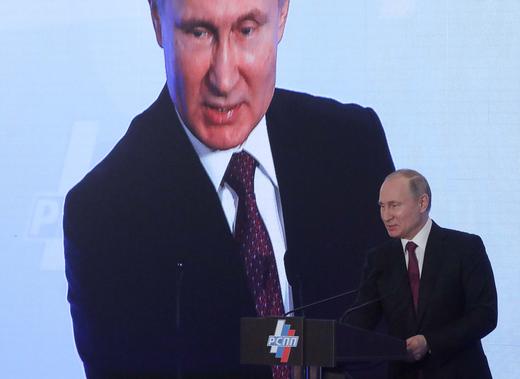 Rumour has it that at least 6 and potentially dozens of Russians were killed by the US-led coalition in Syria, which would be one of the most significant clashes between Russia and the US since the Cold War. But RIA news quoted a Foreign Ministry official as saying that the story is “classic disinformation”, and the US Defence Secretary said he has heard of no such strikes. Leonid Bershidsky argues that indeed hundreds of Russian soldiers have ben killed in Syria, but that Russia views them as not soldiers but mercenaries, on a “purely commercial mission” to take over an oil refinery; there are two wars in Syria, he says one of them geopolitical, the other profit-minded. Energy Minister Aleksandr Novak spoke about Russia’s plans to help Syria rebuild the energy facilities that have been decimated by years of war; Deputy Prime Minister Dmitry Rogozin described Syria last year during a delegation as “a land of unlimited riches”. Russia’s accelerated military build-up in the Kuril Islands claimed by Japan suggests it is playing a long game to acquire the territory, despite bilateral relations proceeding quite amicably. The Kremlin has already gained $43 billion thanks to its OPEC deal.

A meeting between Foreign Minister Sergei Lavrov and his Dutch counterpart Halbe Zijlstra has been canceled after the latter was caught lying about having overheard Putin talking about his vision for a “Greater Russia” that would include the territories of Belarus, Ukraine and the Baltic states. But the Dutch PM defended Zijlstra’s comments, saying that they are an accurate reflection of reality. Germany’s Bayer is suing Russia’s Federal Anti-Monopoly Service over the latter’s investigation into Bayer’s planned Monsanto deal. It is thought that the Moscow plane crash over the weekend was caused by ice on the plane’s instruments that led to faulty speed readings. Hackers stole more than $17 million from Russian banks last year. The US Director of National Intelligence warning that Russia is already meddling in this year’s US midterm elections, and that there is no sign that it will let up.

Authorities in Yekaterinburg have ruled that a mother will not be allowed to have two foster children returned to her care because, they say, she wants to be a man; the decision was based on her blog and an earlier breast reduction surgery; her lawyer described the ruling as “absurd”. Vladislav Surkov, one of Vladimir Putin’s closest aides, penned a Valentine’s Day column sharing his thoughts about why matriarchy is offensive and feminism is a “symptom of decline”. The Kremlin paid out a total of $15.5 million to its citizens on the recommendation of the European Court of Human Rights last year.  President Vladimir Putin has such a bad cold that he is canceling some of his public appearances. “It’s winter,” explained Kremlin spokesman Dmitry Peskov.

PHOTO: Russian President Vladimir Putin attends a session during the Week of Russian Business, organized by the Russian Union of Industrialists and Entrepreneurs (RSPP), in Moscow, Russia February 9, 2018. REUTERS/Sergei Karpukhin