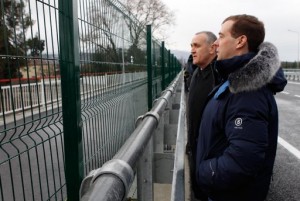 Five police officers have been named and detained in connection with the death and alleged torture of a 52-year-old detainee over the weekend, as a female Kazan resident alleges violent treatment in detention earlier this year.  One of them has already been charged with abuse of office and forging documents.  ‘Such incidents are far from unheard-of in Russian jails.’  Activist Taisia Osipova, the wife of an Other Russia activist, has had her arrest period extended, despite supporters calls for her to be released on the grounds that she has a young child and is a diabetic.  Alexei Navalny and the entire staff of his RosPil organisation have been issued a summons by the anti-extremism department of the police – Navalny says he will ignore it: ‘From the content of the strange letters, we see no legal reason to be distracted from the work that many thousands pay us to carry out.’  The real opportunity for the opposition to succeed now is in the sphere of local elections, says RFE/RL.

Many are expecting a major cabinet reshuffle when Vladimir Putin returns to power in May, although Deputy Prime Minister Vladislav Surkov, Finance Minister Anton Siluanov and Economic Development Minister Elvira Nabiullina will all keep their posts.  Sergei Ivanov says that Western country rankings like those of Transparency International are ‘arbitrary’.  A United Russia deputy has come under fire for writing an anti-Semitic tweet about an opposition member.  The Justice Ministry has received 68 new applications to form political parties.  The Economic Ministry may begin forcing cinemas to show domestic films for at least 24% of screen time.  Duma lawmakers have agreed to set up a working group to investigate reports of election violations from December 2011.  70% of protesters describe themselves as ‘happy’, according to a new study by a Moscow think-tank.  Moscow rallies are an obstacle to ambulances, say city medics.  A Krasnodar official will experiment with living on the equivalent of the minimum Russian monthly salary, and will document his efforts online.

U.S. Ambassador Michael McFaul is pushing for Jackson-Vanik to be repealed on its own terms, and not in connection with other rights measures: ‘Although there are obvious problems with democracy and human rights in modern Russia, the persistence on the books of the Jackson-Vanik amendment does not help to solve them at all,’ he said.  U.S. senators have expressed ‘grave concern’ over a transaction to sell Russian helicopters to the U.S. military for use in Afghanistan, as Russia says that arms sales to Syria will continue.  A deal on the U.S. missile defense system in Europe could see the Obama administration passing secret data to Moscow to provide reassurance, but reconciliation remains a long way off.

PHOTO: Russia’s President Dmitry Medvedev (R) speaks with Alexander Ankvab, president of the Georgia’s breakaway region of Abkhazia, in January. The United States refused to recognize legislative elections in Abkhazia and urged Russia to withdraw its troops in the area to positions before the 2008 war. (AFP Photo/Dmitry Astakhov)