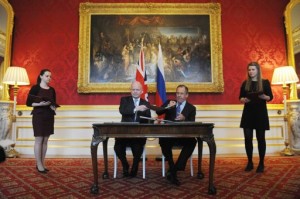 The Kremlin’s human rights council has defended Alexei Navalny, saying that the current fraud allegations against him are merely a bid to punish him for his political activity.  Opposition party A Just Russia has ejected Gennady Gudkov and his son Dmitry for refusing to give up their membership in the Opposition Coordination Council, and claimed that the pair’s dual memberships damaged the party’s political interests and image.  Opposition activist Leonid Razvozzhayev has been transferred to a location unknown to his lawyers or relatives, prompting his lawyer to say that he has ‘disappeared‘.  The U.K. Foreign Secretary discussed the trial of Sergei Magnitsky with his counterpart Sergei Lavrov in London yesterday, saying that it was ‘one of the highest profile examples of failings in Russia’s judicial and prison systems’ and criticised the lack of ‘meaningful progress towards establishing the circumstances surrounding [Magnitsky’s] death’.  Russia warned the U.K. that any effort to arm Syrian rebels would be a breach of international law.  The Liberal Democratic Party has promised to pursue A Just Russia Deputy Ilya Ponomaryov for accusing Vladimir Zhirinovsky of plagiarising his PhD dissertation.  Elections official Vladimir Churov says that anyone who doubts United Russia’s 2011 State Duma victory should seek psychiatric help.

In light of yesterday’s announcement that Elvira Nabiullina will be the next head of the Central Bank, economists have proposed that ‘her intimacy with the president and the government puts a big question mark over the [bank’s] independence’, whilst Zhirinovsky criticised the appointment on grounds of her gender.  It is expected that the bank will continue to resist government pressure and hold its main borrowing rates until Nabiullina takes charge.  The Duma has given preliminary approval to legislation that would aim to curb drunk driving by increasing penalties.  The head of Gazprom is meeting with China National Petroleum Corporation to discuss a potential gas supply deal; and two of Japan’s biggest trading companies are interested in teaming up with Novatek on a $20 billion liquefied natural gas project.  Moscow’s Sova Center says that Russia’s levels of xenophobia and radical nationalism remained high last year, citing hate-related deaths and injuries.

President Vladimir Putin regularly spends time with action movie star Steven Seagal, with their latest meeting apparently prompting him to call for a Soviet-style physical education program for Russian youths. ‘In what seemed to be a choreographed incident, Seagal rushed into a crowd of children trying to pose with Putin and pulled him out, as if acting as his bodyguard.’  The Guardian has an in-depth report on behind-the-scenes fighting at the Bolshoi Theatre.