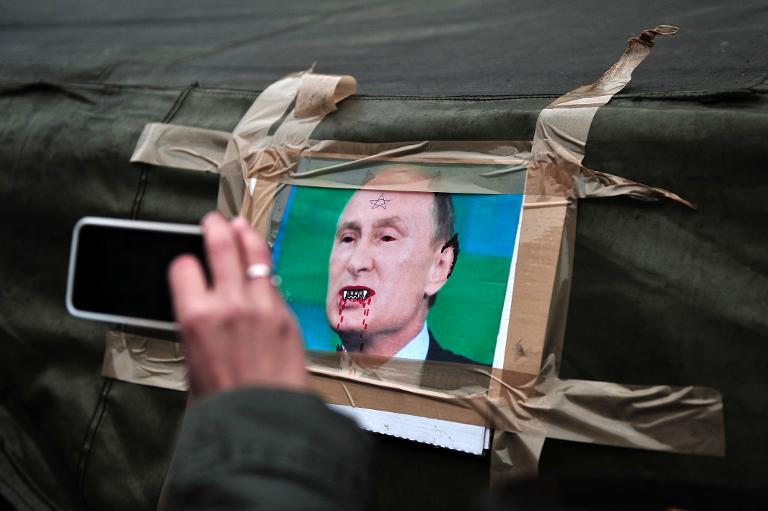 German Chancellor Angela Merkel warned of massive damage to Russia’s politics and economy, and predicted catastrophe for Ukraine, if Moscow does not re-think its position on Crimea; Western leaders are ready to impose their sanctions, and a threat to Ukraine is a threat to Europe, she said.  10,000 Russian troops currently line the border with Ukraine, and Ukraine’s interim parliament has voted to create a 60,000-strong national guard to ensure security.  Russian forces in Crimea reportedly opened fire on a Ukrainian reconnaissance plane yesterday, as Western analysts anticipate an eventual military operation in eastern Ukraine.  This weekend’s referendum in Crimea on whether or not to join Russia has already been decided, says The Economist.  Crimea’s parliament thinks that Gazprom should get involved in the breakaway region’s oil and gas production, apparently claiming, ‘It’s not our issue.’  President Vladimir Putin used a paralympic delegates meeting to ‘stress that Russia was not the initiator’ of the current crisis.  ‘Vladimir Putin initiated this dangerous game,’ says The Times.  China is a key player behind the scenes, says Al-Jazeera. ‘A lot of the diplomacy right now is focused on […] making sure China doesn’t side with Russia.’

Goldman Sachs has its work cut out for it trying to improve Russia’s image with overseas investors, says Bloomberg.  Putin Consulting, started by a relative of President Vladimir Putin, is attempting to lure foreign investors to Russia by reassuring them that the economy is in the President’s hands.  A state-run pollster says Putin’s approval rating is at a three-year high, and concern over Ukraine’s future is boosting the price of crude oil.  Alfa Bank is pressuring Mechel to pay back a $150 million loan ahead of schedule.

The blog of prominent opposition figure Alexei Navalny has been barred from public access because Navalny violated the terms of his house arrest to update it; but the Kremlin has also banned three other websites that regularly feature criticism of its rule. This is legal under a 2012 law which allows the government to block websites without a court order if it deems their content illegal.  Nadezhda Tolokonnikova and Maria Alyokhina have announced the creation of a newly-established center for the defence of prisoners’ rights.

PHOTO: A woman takes a picture with her mobile phone of a caricature of Russian President Vladimir Putin stuck onto a tent, within a rally to protest Russia’s stance in the Ukraine crisis, on Kiev’s Independence square on March 2, 2014 (AFP Photo/Louisa Gouliamaki)