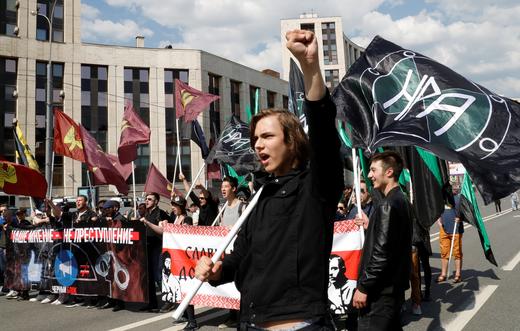 Hundreds gathered in Moscow yesterday chanting anti-government slogans and demanding for the second time that the popular messaging app Telegram be unblocked, with opposition politician Mikhail Kasyanov telling demonstrators, “The internet is the main freedom that exists for all of us. We cannot let that happen.” Around 20 protesters (or 25-30) were detained, of an officially-estimated 1,000 present. Roskomnadzor unblocked around 8,000 IP addresses belonging to Alibaba, which it blocked last month in a bid to prevent users from accessing Telegram, in order “to ensure the stable operation of third-party Internet resources”. The director-general of MI5 is planning to accuse the Kremlin today of “flagrant breaches of international rules” regarding the nerve agent attack on former spy Sergei Skripal, in which still no suspects have been identified. The RT television channel will not lose its broadcasting license in the UK over its reporting of the Skripal incident; media watchdog Ofcom ruled it “fit and proper”. The Egyptian Foreign Ministry has demanded an explanation from Moscow about an opinion poll broadcast – and then removed – by RT about the ownership of a disputed border triangle in the Red Sea.

A new VTsIOM survey found that 78% of Russians do not believe that a peaceful revolutionary process – such as the events occurring in Armenia over the last month – is possible in their country. The Justice Ministry has reiterated its rejection of the Hague Arbitration Court’s ruling that it must pay Ukrainian companies for losses incurred after the 2014 annexation of Crimea, basing it on what it calls the arbitration’s lack of jurisdiction. Ukraine has pointed out that the Nord Stream 2 Russian gas pipeline will make Germany “a European gas hub”. The State Duma will consider making it illegal to observe sanctions imposed by foreign countries; and for a Russian citizen to help foreign government sanction Russia by providing information. The Kremlin is still mulling its official response, including the possible banning of goods and materials from foreign countries.

Vladimir Putin’s speech style has changed, writes Michele Berdy, lamenting the disappearance of his former “salty language that verged on truly bawdy sayings” and quoting some of his finer moments. The Kremlin says changing the constitution to allow Putin to run for a third term in 2024 is not on the President’s agenda. RFE/RL writes on the stagnation that is yet another presidential term for Putin, and some of the key challenges he is facing over the next six years.

PHOTO: People attend a rally in protest against court decision to block the Telegram messenger because it violated Russian regulations, in Moscow, Russia May 13, 2018. (Reuters/TATYANA MAKEYEVA)