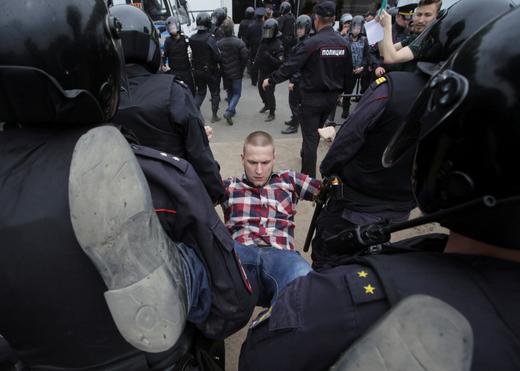 The Kremlin has disregarded international calls (critics now include Germany) to release demonstrators who were detained at the anti-corruption protests on Monday, saying that the authorities acted in accordance with the law. Moscow Mayor Sergei Sobyanin called the protests “a vile and dangerous provocation”. Roman Rubanov, a close associate of Navalny, was sentenced to 10 days in jail for disobeying police during the rally, and opposition leader Ilya Yashin was given 15 days. Further detainees are expected to be charged. Reuters reports on the extent of Russian state media’s failure to report the event. The BBC notes that the pro-Kremlin press dismissed and criticised the protests as “illegal” “hooliganism” and accused them of trying to ruin the Russian Day holiday. Despite the high numbers of anti-corruption protesters who came out this week, Russian opposition groups are not very widely supported and lack specific political demands, reports the New York Times. “I wouldn’t talk of a movement — I think it’s a preparation stage since society is getting more political.”

Human Rights Watch says it has documented cases of unpaid labourers working in dangerous conditions on Russia’s 2018 World Cup venues, blaming Fifa for failing to protect workers. The controversial Nord Stream 2 pipeline, which will transport gas directly from Russian to Germany, “will finance the Putin regime for another 50 years,” says the Guardian, because, despite 5 European companies being involved, “for some mysterious reason, 100% of the shares belong to Gazprom”. It is estimated that trade between Russia and China will reach $80 billion this year. President Vladimir Putin presented the Family Glory award to a family of Jehovah’s Witnesses, one month after the organisation was declared “extremist” by the Russian Supreme Court. Lom-Ali Gaitukayev, the man convicted for the murder of journalist Anna Politkovskaya, has died in prison following severe chronic disease.

After former FBI Director James Comey told the Senate that Moscow is “coming after America”, Bloomberg is reporting that investigators in Illinois found evidence of more extensive Russian election hacking than had been previously understood. During his Congress hearing, US Attorney General Jeff Sessions denied having had undisclosed meetings with Russian officials. Vladimir Putin says Russia cannot afford the kind of mass electronic surveillance systems used by the US.