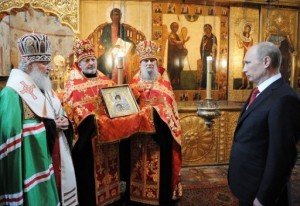 The Kremlin is planning to draw up an Internet blacklist of sites that will be blocked to the public – but it will not publicly reveal which websites will make the list, apparently because ‘declassifying the websites would advertise them’.  A new VTsIOM poll shows a growing awareness of the Orthodox Church’s political influence, in conjunction with falling influence in the daily lives of citizens, with 49% saying they ignore the church.  The Society for Consumer Rights Protection is fighting back against Orthodox charges of extremism, after it argued that commercial activities at the Christ the Savior Cathedral (the home of Pussy Riot’s first protest performance) violated consumer protection law.  A Novosibirsk artist will be forced to pay a small fine for replacing light-box advertisements with pro-Pussy Riot posters earlier this year.  The Royal Court Theatre in London is to stage verbatim readings of Pussy Riot’s testimony on Friday morning, when the group will be in court to await their verdict.  This piece argues that, although Vladimir Putin’s actions with regard to various opposition figures this year have been ‘thuggish’, he still ‘has yet to create the anger and the hunger for change that led to the Arab Spring.’

The disparate Russian opposition will hold a nationwide vote online in October to determine its most popular leaders and elect a council to organise mass anti-Kremlin protests and build a more organised movement.  Other Russia activist Alexei Devyatkin and his wife, journalist Jenny Curpen, are seeking political asylum in Ukraine after being targeted by police following May’s March of Millions.  According to a government report, state-owned Rosneft was responsible for three-quarters (2,727) of all oil spills in the Khanty-Mansiisk region last year.  Two environmental groups this week released a report saying that companies drilling for oil in the Russian Arctic are ill-prepared for a spill and could cause an environmental disaster.

Czech group PPF has acquired a stake in Russian fertiliser firm Uralkali in exchange for its holding in domestic bank Nomos.  Grain yields are down 28%, year on year, thanks to drought.  Will the Skolkovo Innovation Center be ready to host the G8 Summit in 2014?