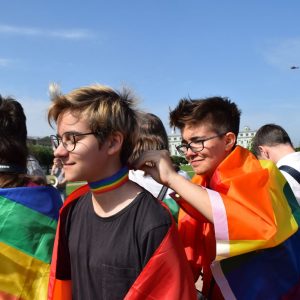 After various attempts by the authorities to prevent it from happening, around one hundred activists successfully held a sanctioned Gay Pride gathering in St. Petersburg, apparently attracting the largest turnout since 2010. Open Democracy marks five years of the Foreign Agent law, which has made the work of many NGOs ‘practically impossible’, but among all the negatives one positive emerges: ‘the development of extensive legal practice in defending the rights of NGOs and their representatives’.  Theater director Kirill Serebrennikov, whose ballet ‘Nureyev’ was forcibly pulled from the stage by the authorities, has now had his passport revoked, preventing him from fulfilling commitments abroad. Due to overwhelming demand, the Defence Ministry will allow women to train as fighter pilots for the first time since the World War Two.

Wired takes a look at Russia’s commitment to undermining democracy using a host of digital weapons. According to Snapchat’s parent company, the US messaging app has been registered with Russia’s media regulator without its knowledge. As the diplomatic row over sanctions continues, Washington could apparently instruct Russia to close one of four consulates in the United States. A new film, Crimea, a pro-Kremlin examination of the Ukraine conflict, will hit screens in Russia and Belarus this year, thanks in no small part to funding by the Ministry of Defense. Moscow’s plans to bulldoze through parts of Kerch in order to build a $5 billion highway that would potentially cross the whole of the Crimean Peninsula, have raised the hackles of local communities, who are set to lose their homes and land for what they say to be inadequate compensation.

Presumably thanks to consumer demand, Russia’s economy expanded at the fastest pace in more than three years, with GDP growing by 2.5% last quarter from a year ago. Reactions to the new article by Thomas Piketty and colleagues on economic inequality in Russia from the tsarist era to the present day can be found here and here. Venezuela is facing a political and economic crisis – Reuters considers how Vladimir Putin and Rosneft are likely to profit.