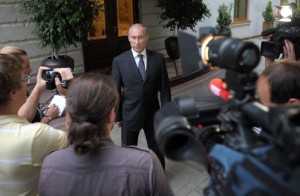 Dmitry Kratov, the only defendant in the case of Sergei Magnitsky’s death in custody, has pleaded not guilty.  President Vladimir Putin invited Masha Gessen to meet him at the Kremlin in a bid to get her re-employed at the travel magazine that fired her for refusing to cover his endangered crane stunt, but she refused.  During the meeting, Putin also apparently admitted that his Black Sea dive was a set-up, and that some of his wildlife stunts (the New York Times has compiled an index of these, the most recent of which was spoofed by two Krasnoyarsk residents this week) have been staged. ‘Of course, there are excesses. And I am enraged about it.’  Putin also followed Sergei Lavrov in condemning the attack that killed the U.S. ambassador to Libya earlier this week, and warned Arab leaders to take responsibility for their territories.

State-owned diamond miner Alrosa has sold a 51% stake in its iron ore mine to Evraz, part owned by Roman Abramovich.  Aluminium producer RUSAL is seeking Chinese investment for its projects in SIberia.  Russia has confirmed that it will not make any greenhouse gas cuts based on the U.N.’s Kyoto Protocol.  The head of Carlsberg has warned Russia that it risks deterring foreign investors if it goes ahead with a proposed ban on plastic bottles.  Ukraine is planning to cut its gas imports from Russia next year by 2.5 billion cubic meters.

The husband of one of the jailed Pussy Riot members has said that the girls will continue to oppose the government– with a focus on Putin – after they are released.  Bruno Balvanera, a Mexican broker in Russia, says ‘paperwork must be accepted as part of life both within and outside the government’.