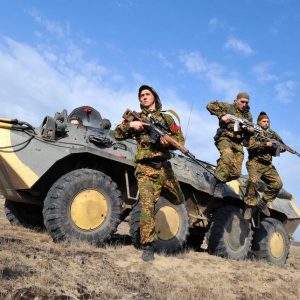 Russia’s biggest war games since 2013 begin today in cooperation with Belarus; Minsk has apparently assured concerned Western observers that they will not violate international agreements. Neighbouring nations are not so sanguine abut the war games; Lithuanian President Dalia Grybauskaite has said it’s “clear” that Putin will use Zapad 2017 as a pretext to deploy more weaponry and personnel along Russia’s borders and retain them there. Sweden is similarly wary, hence holding its biggest war games in twenty years with support from NATO countries, simulating an attack from the east. NATO says it will observe the games with “calm and confidence”. Lithuania’s Defense Minister Raimundas Karoblis however notes, “We can’t be totally calm. There is a large foreign army massed next to Lithuanian territory”. Defence Minister Sergei Shoigu is currently in Damascus to congratulate Syrian President Bashar al-Assad on “lifting the siege” imposed by the Islamic State in the city of Deir Az Zor.

A series of anonymous bomb threats (believed to be a spam attack) have been reported across Russia over the past four days, finally arriving in Moscow where shopping centres, railway stations and other public buildings have been evacuated. It is estimated that by Tuesday of this week, 45,000 people had been evacuated. Kremlin spokesman Dmitry Peskov has said police should impose harsh measures on the “extremists” who have tried to prevent the screening of the film Mathilde, which depicts a love affair between Tsar Nicholas II and a ballerina. Culture Minister Vladimir Medinsky has also criticised the furour surrounding the film and urged cinemas not to pander to “irresponsible hysteria”. The chief executive of Austrian energy company OMV (which has invested in the Nord Stream-2 trans-Baltic gas pipeline project) has told Reuters that US sanctions have made financing large Russian projects “almost impossible”.

RFE/RL reports on the hazards facing those who work for anti-corruption campaigner Alexei Navalny: police harassment and the constant fear of arrest. The US government has banned federal agencies from using security software produced by Russian company Kaspersky Lab, as a result of fears it may be linked to state-sponsored espionage. Despite featuring heavily in it, Vladimir Putin apparently has no desire to read Hillary Clinton’s newly released book on her failed presidential bid.